Seven out of eight persons want the NIH to use its rights in federally funded patents to prevent U.S. consumers from paying more than other high income countries, according to a survey of 170 randomly selected U.S. residents. The survey was conducted August 26 to August 28, 2013, and involved two questions regarding NIH funded drug development.

Respondents were provided with data regarding the US National Institutes of Health (NIH) overall budget as well as the amount budgeted for HIV/AIDS research. The background information also gave the percentages of US patents that benefited from US taxpayer funding of research that contained the terms ‘cancer’ and ‘HIV’ in the patent claims (19% and 23% respectively) from 2010 to 2011. The first question was:

Were you previously aware of the extent of US government funding of medical research, including research that leads to patented inventions?

On the topic of US drug prices as compared to other high-income countries, respondents were provided with data regarding a policy the NIH has been asked to adopt. The policy in question asks the NIH to grant new non-discriminatory licenses to generic drug manufacturers to use the patents on NIH funded drug discoveries when drugs are more expensive in the US than in other high-income countries. It then presents the perspective of drug companies, who argue that patent owners/drug companies should be free to charge US residents higher prices, regardless of the financing of the drug’s research and development. The question asked was as follows:

The U.S. National Institutes of Health (NIH), a government agency, has rights to the patents for dozens of drugs that were developed with federal funds. Should the NIH require patent holders to charge no more to residents of the United States than the prices in Canada, Europe and other high-income countries, for the same drug?

Attached as PDF and spreadsheet files are the survey questions 1 and 2 as viewed by respondents, the summary results of the survey, including respondents’ demographic information, and the detailed responses for each individual.

Charts showing the cross tabulations for answers to questions 1 and 2 by education and gender are also shown in the Appendix, as well as additional context regarding the current petition asking the NIH to adopt a rule on the pricing of NIH funded inventions.

The identification of the survey audience and the collection of the answers was done by SurveyMonkey.Com, using their own audience, which you pay to use. They describe their collection procedures here:

On October 25, 2012, the American Medical Students Association (AMSA), Knowledge Ecology International (KEI), U.S. Public Interest Research Group (PIRG) and the Universities Allied for Essential Medicines (UAEM) filed a petition (/node/1573) requesting the National Institutes of Health (NIH) grant Bayh-Dole Act march-in rights for the patents held by Abbott Laboratories relevant to the manufacture and sale of ritonavir, a federally funded invention that is much more expensive in the United States than in Canada, Europe or other high-income countries. The NIH has yet to grant a hearing on the petition.

The petition focuses on one drug, ritonavir, which is priced 4 to 10 times higher in the USA than in other high income countries, but asked for a more general rule that would provide a march-in remedy for any drug when US prices were higher than prices for the same product in other high income countries. The petition cited data from a survey (attached here) of 14 NIH funded drugs, 13 of which were priced higher in the United States than in foreign markets, often significantly so. 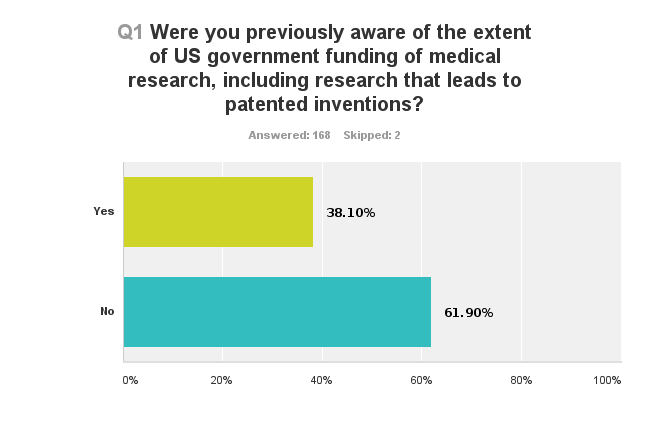 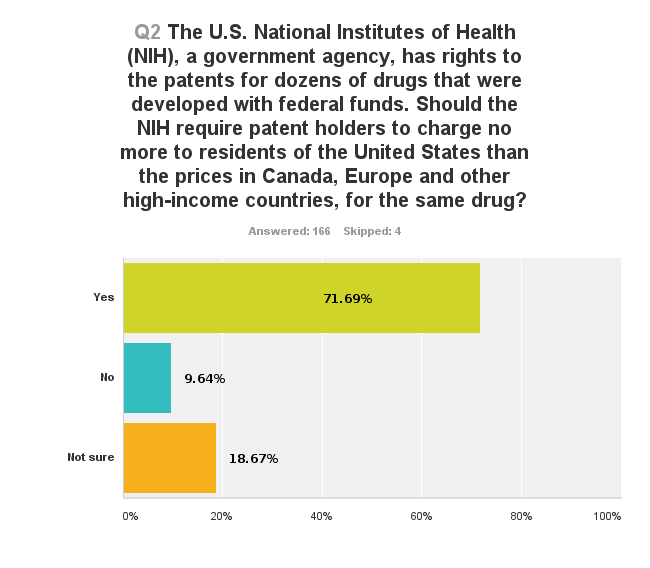 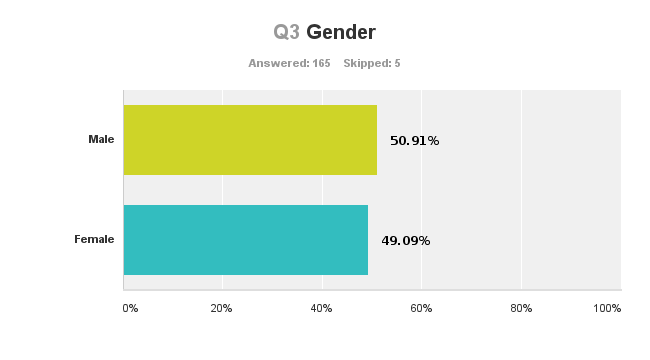 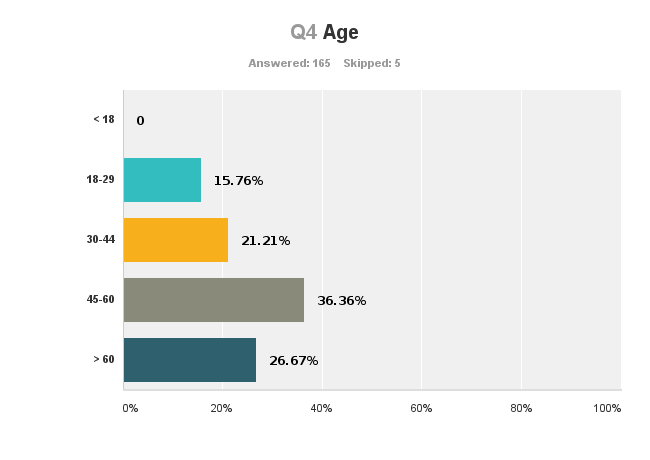 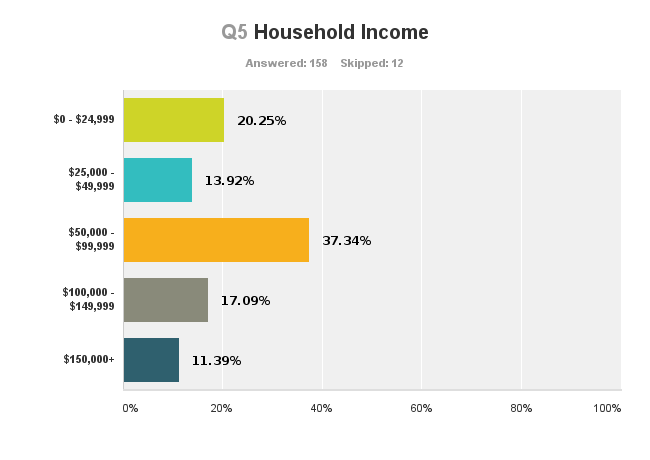 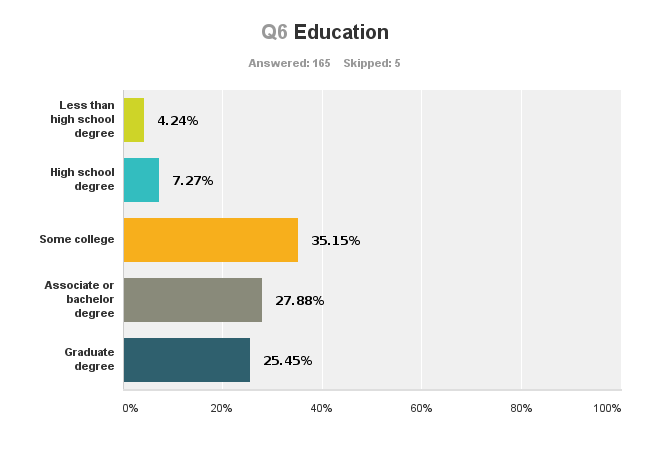 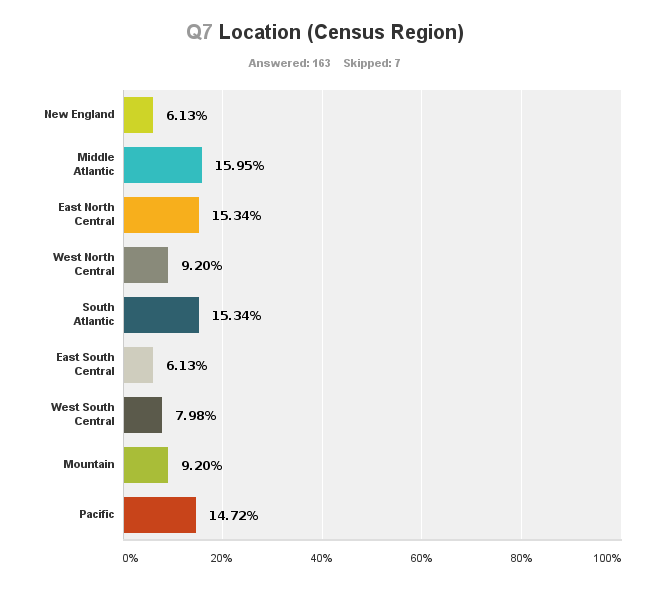 Answers to Questions 1 and 2 by Education 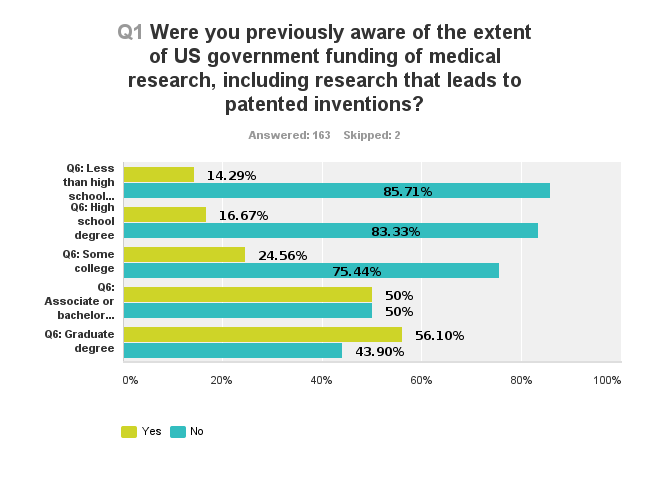 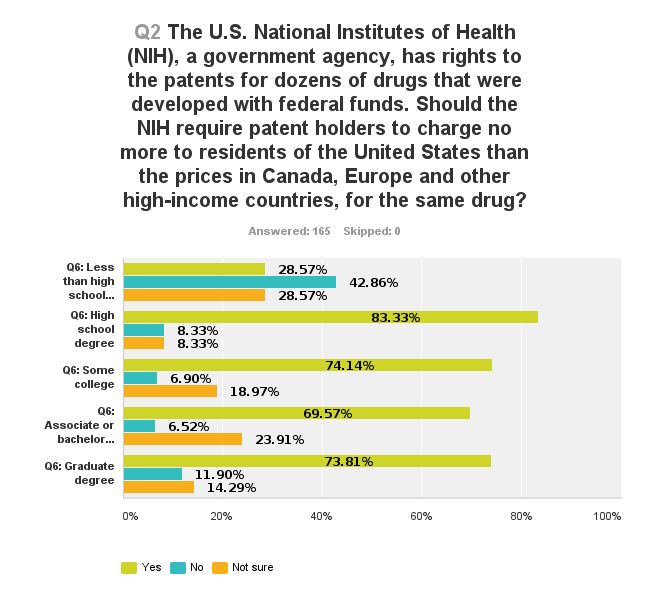 Answers to Questions 1 and 2 by Gender 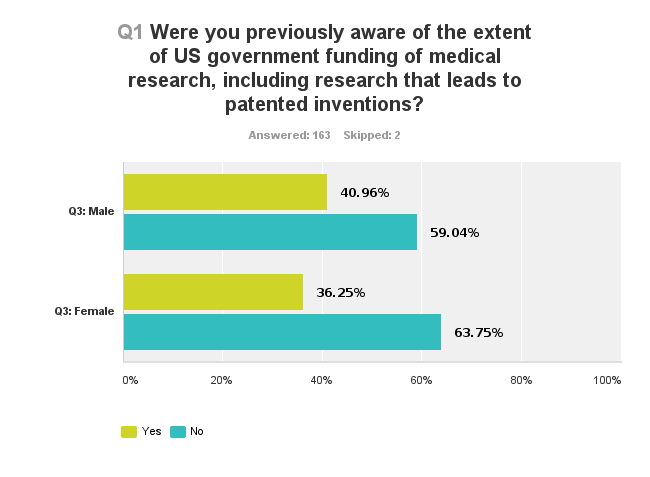 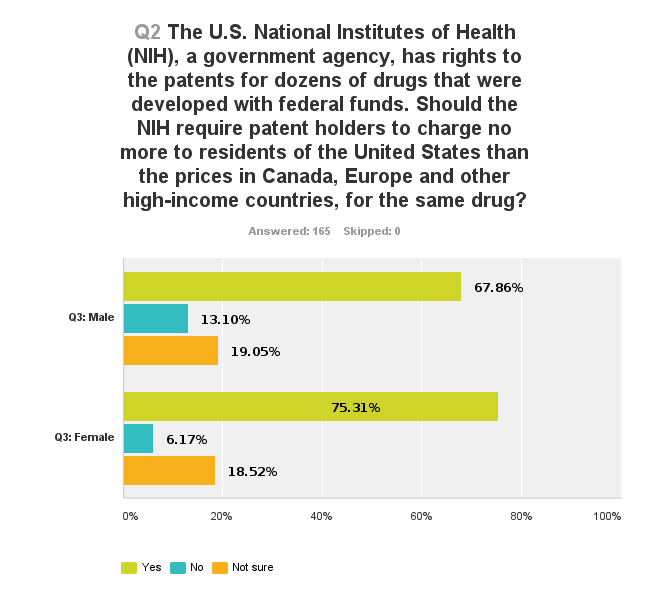 Knowledge Ecology International»Blogs>>Survey: 7 out of 8 persons say US residents should not pay more than other high income countries for NIH funded drugs