Wednesday, at the George Mason University Law Campus in Arlington, VA, the Office of the US Trade Representative hosted an all day Stakeholder Forum in conjunction with the fifth negotiating round of the Transatlantic Trade and Investment Partnership. The first part of the day was devoted to Stakeholder Policy Presentations, with several hours of presentations by a variety of industry, academics, trade associations, and public interest groups. The latter part of the day consisted of a briefing by the US Chief Negotiator Dan Mullaney and the EU Chief Negotiator Ignacio Garcia-Bercero.

Stakeholder Policy Presentations
While there was a wide variety of topics discussed at the event (from ISDS to automotive regulations to cranberries to labor to used cooking oil), the USTR organized the rooms roughly by topic, so those most concerned with one particular area would stay mostly in one room. KEI mostly observed the presentations in the largely IP related presentation room.

There were many strong presentations on the part of consumer groups during the day, and a particularly notable presentation was made by Robert Weissman on behalf of the Transatlantic Consumer Dialogue. The presentation, on the topic of consumer concerns on regulatory convergence, was perhaps the best attended presentation made by a consumer group during the day, with the many negotiators from both the EU and US sides in attendance. In fact, the EU Chief Negotiator Ignacio Garcia-Bercero was in attendance and offered up a question during the brief Q&A period, “From the point of view of consumers, do you see value in considering ways in TTP to facilitate closer cooperation between US and EU regulators?” Weissman responded that while the TACD is supportive of increased cooperation between regulators, but were deeply concerned about what form that cooperation would take in the context of a trade and investment negotiation where business input and interests were likely more heavily weighted than those of consumers.

Other lively presentations throughout the day included Amgen’s frank presentation of what their company (as a member of PhRMA) sought to gain from the Partnership as well as an engaging presentation from the Germany Pirate Party advocating for increased transparency and the inclusion of privacy provisions. 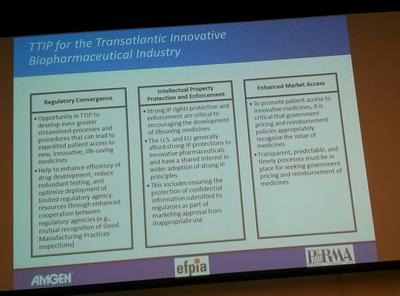 TTIP Chief Negotiator Briefing
Both the chief US and EU negotiators made brief statements before opening up to questions from the audience of stakeholders. The US negotiator, Dan Mullaney, outlined the topics under discussion during this round of TTIP negotiations taking place this week. Mullaney stated that the negotiators were largely addressing tariffs, services, investments, procurement as well as regulations and standards. EU Negotiator Ignacio Garcia-Bercero talked about the need for the US and the EU to come together and work closely on the TTIP, clearly stating that with a successful TTIP the more the US and the EU can influence how regulations develop internationally.

The session was then opened to audience questions which revealed several key points regarding the TTIP. A representative from the Communications Workers of America asked the negotiators if, given the continued calls for transparency, they would begin to release negotiating texts after each round. While the negotiators largely echoed the tired responses always given to requests for draft texts (have posted summaries of negotiating positions, continually engage with stakeholders, and need ‘negotiating space’), Garcia-Bercero did state that the full agreement text will be public prior to asking for the European Parliament’s approval. Additionally, though they could not yet provide specific dates, the negotiators announced that the next round of TTIP negotiations would take place in Brussels in July.

Concluding Notes
Although the opportunity for stakeholders to present to negotiators in some manner is appreciated, at the end of the day this sort of an event is simply a checkbox for USTR to tick in order to say that they have solicited input from a variety of stakeholders. When really examined, an event such as this does nothing to increase transparency, and there is no true engagement occurring. Negotiators can rove between the rooms, showing preference to some stakeholders’ presentations over others’ (still giving unequal time to industry, academics, and nonprofits), and even then presenters are given only 8 minutes to speak, barely giving them time to scratch the surface of the complex issues involved in the TTIP.

Furthermore, at the heart of the issue with the stakeholder engagement day on the TTIP is the fact that negotiating texts are completely secret. Stakeholders are asked to provide perspectives and input on a text of which they have not seen one word. Until draft negotiating texts of trade agreements are released in a routine, timely fashion, stakeholder events such as the one held Wednesday are just a token gesture intended to quiet the growing din of critics.

Knowledge Ecology International»Blogs>>KEI Notes on TTIP 5th Round: How to engage in a dialogue without access to the text?