This week, the World Intellectual Property Organization (WIPO) is convening the 30th session of the Intergovernmental Committee (IGC) on Intellectual Property and Genetic Resources, Traditional Knowledge and Folklore (GRTKF) from 30 May 2016 to 3 June 2016. The goal of this week’s session is to “[u]ndertake negotiations on [genetic resources] GRs with a focus on addressing unresolved issues” and to consider “options for a draft legal instrument.” The Committee is chaired by Ian Goss (Australia).

Currently, the IGC has highlighted two potential approaches to tackle misappropriation of genetic resources (GRs): 1) the implementation of mandatory disclosure requirements and 2) the use of defensive measures, which the IGC aims to refine and clarify throughout the week. While mandatory disclosure would require patent applicants to indicate any use of GRs in their inventions, defensive mechanisms would instead use databases, increased national legal policies, and voluntary disclosure to reduce the number of erroneous patents granted.

Although the Chair has repeatedly emphasized the importance of “narrowing existing gaps” regarding policy views, divisions between member states are readily apparent, especially regarding the two approaches presented. To demonstrate how contentious the subject is, note the highly bracketed text on mandatory disclosure requirements and defensive measures from the first revision of the consolidated working document:

DATABASE SEARCH SYSTEMS
8.2 Members are encouraged to facilitate the establishment of databases of [information associated with] genetic resources, [their derivatives] and [associated traditional knowledge] [traditional knowledge associated with genetic resources] for the purposes of search and examination of patent applications, in consultation with relevant stakeholders and taking into account their national circumstances, as well as the following considerations:

(a) With a view towards interoperability, databases shall/should comply with minimum standards and structure of content.

(b) Appropriate safeguards shall/should be developed in accordance with national law.

(c) These databases will be accessible to patent offices and other approved users.

Most negotiations have taken place behind closed doors, but the plenary discussions are described below.

India, on behalf of the Asia Pacific Group, opened the discussion by remarking that most of its members hope the misappropriation of GRs and TK can be addressed through benefit sharing based on prior informed consent (PIC) and mutually agreed terms (MAT) between users and resource providers. They encouraged the IGC to examine a mandatory disclosure requirement. Furthermore, the delegation asked WIPO to help develop a comprehensive GR database system. 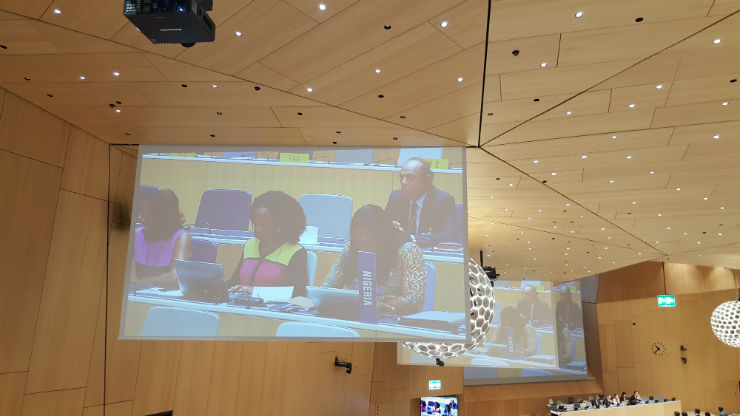 Nigeria, coordinator for the African Group, underscored the “immeasurable socioeconomic value of TK and GRs”, and thus the importance of creating minimum standards as a part of an international legal instrument.

China, Indonesia speaking for the Like-Minded Group, and the Bahamas on behalf of GRULAC, like the Asia Pacific Group and the African group, all reiterated their support for a legally binding instrument to arise from the IGC in order to effectively protect GRs and TK. Indonesia further noted that mandatory disclosure requirements were needed to narrow divergent use of GRs and TK.

The delegation of Greece spoke for Group B, noting that the protection of GRs and TK should ensure legal certainty, uniqueness, innovation and creativity. Moreover, Group B suggested focusing on an evidence-based approach through previous member states’ national experiences. Although they praised the significant amount of work done since 2001, when the IGC sessions began, the delegates highlighted the continued lack of common understanding.

Tajikistan, speaking for the Group of Caucasian, Central Asian and Eastern European Countries, echoed previous comments by mentioning the vital need for balanced and effective protection of GRs and TK.

The Latvian delegation represented the Central European and Baltic States, remarking that new agreements should be complementary to existing legal frameworks, with a focus on the patent system. Concern was raised about IGC 30 being the last forum to discuss GRs until IGC 34.

The European Union indicated that any disclosure system should be limited to patent rights only, and that for disclosure to be necessary there would have to be a clear link between the GR and the invention based upon it. The delegate stressed that revocation of a patent should not constitute a sanction.

Following the opening remarks, the debate took a turn towards the specifics of the consolidated document. As the chair noted, most terms in the document had standard international definitions, yet many had been slightly altered without explanation, decreasing clarity. This feeling was echoed by members including the US, Peru, Tupaj Amaru, and the EU. Debate ensued as to which terms should remain.

Russia proposed to drop the definition of “biotechnology”, and was supported by Tupaj Amaru and the USA. On the other hand, the Australian, Jamaican, Peruvian, and Colombian delegations opposed deleting “biotechnology” as it was included in the Nagoya Protocol and they stated it was linked to other terms. Other discussion points included the use of the term “derivatives” throughout the working document. While Switzerland and the EU argued that inclusion of the term could reduce invention, Peru and Iran noted that they want to keep “derivatives” in the text. A similar divide existed on the issue of mentioning the prevention of misappropriation of GRs, which Switzerland and the EU cast out as a topic which should not be discussed, while Iran proposed that it be included as a policy objective.

Several states remarked that the preamble should not be a priority in the discussions, including Colombia, Switzerland, and Jamaica. Other oppositions included the subject of revocation of patents as a sanction, which Switzerland emphasized should not be allowed, while Iran and Tupaj Amaru said it should be considered. The matter of disclosure requirements was barely touched upon by the Swiss delegate, who proposed that there should be maximum and minimum standards. However, further discussion on disclosure is certainly expected later in the week.

The plenary sessions were followed by almost a day and a half of informal consultations between member states and indigenous representatives, culminating in a revised consolidated text which was released on June 1.

Clearly, there are significant differences between the views of member states in the IGC. If the committee aims to “narrow the existing gaps” by Friday, there is still a long way to go.