*The author thanks Professor Marc Perlman (Brown University) for his comprehensive notes on the IGC deliberations of 3 June 2016.

During the course of protracted WIPO negotiations over the protection of genetic resources at the Intergovernmental Committee on Genetic Resources, Traditional Knowledge and Folklore (IGC30, 30 May 2016 – 3 June 2016), the United States of America submitted a proposal on Tuesday, 31 May 2016 entitled, “Seeking a Better Understanding of Switzerland’s “Federal Act on the Protection of Nature and Cultural Heritage” and “Federal Act on Patents for Inventions” by Hypothetically Applying them to U.S. Patent Number 5,137,870.”

A key source of contention in this Committee is the proposed mandatory disclosure requirement for the disclosure of origin or source genetic resources in a patent application, which as also been the subject of unfruitful negotiations at the World Trade Organization’s TRIPS Council.

At WIPO, the United States, along with Canada, Japan and the Republic of Korea, form a bloc of four countries who oppose a mandatory disclosure requirement. The United States questions the feasibility of “a disclosure mandate providing transparency” and has raised concerns that it could be burdensome” as a “result of the enormous information potentially required” (WIPO/GRTKF/IC/30/9)

Several proposals have been made to the IGC. The Swiss proposal aims to introduce a disclosure requirement in the Patent Cooperation Treaty (PCT) applying to both international and national applications and requiring the patent applicants to disclose the source of genetic resources and/or traditional knowledge.

The proposal made by the European Union and its Member States includes an obligation to implement a mandatory requirement to disclose the country of origin or source of genetic resources for all international, regional and national patent applications.

The proposal made by the African Group builds on the proposals made by Switzerland and the European Union and also includes incorporation of the internationally recognized certificate of compliance as stipulated in the Nagoya Protocol on Access to Genetic Resources and the Fair and Equitable Sharing of Benefits Arising from their Utilization to the Convention on Biological Diversity (2010).50

The Like-Minded Countries’ proposal concerns the mandatory disclosure of information in the intellectual property application, which involves genetic resources, their derivatives and associated traditional knowledge. Such information should include the country of origin and source, evidence of prior informed consent, evidence of benefit-sharing under mutually agreed terms, and written and oral information for enabling search and examination of the intellectual property application.

Alternative mechanisms to disclosure requirements have been proposed. Another current international initiative for a disclosure requirement is the proposed Article 29bis of the World Trade Organization (WTO) Agreement on Trade-Related Aspects of Intellectual Property (1994) (TRIPS Agreement) propounded by a number of countries.

The text of Article 29bis states:

Although 110 WTO members expressed support for amending the TRIPS Agreement to include a mandatory disclosure requirement, it did not enjoy consensus, analogous to the situation at WIPO.

On Friday, 3 June 2016, the United States introduced its proposal, Seeking a Better Understanding of Switzerland’s “Federal Act on the Protection of Nature and Cultural Heritage” and “Federal Act on Patents for Inventions” by Hypothetically Applying them to U.S. Patent Number 5,137,870.

The premise of the US proposal notes:

Disclosure requirements have been characterized as simple transparency requirements, which will not be burdensome to patent applicants. Our review of disclosure requirements, however, suggest that these requirements will be difficult for applicants to satisfy, and that applicants will be required to disclose many sources of any genetic resource (GR) used at some point in making the invention, as well as those which could have been used. As a result of the enormous information potentially required, we question the feasibility of a disclosure mandate providing transparency and have concerns that it could be burdensome. Also, we question whether this requirement would discourage applicants from filing patent applications on certain inventions, thus further decreasing transparency.

The US proposal endeavors to apply the Swiss access and benefit sharing (ABS) regulations implementing the Nagoya Protocol (Federal Act on the Protection of Nature and Cultural Heritage) to “U.S. Patent 5,137,870 (“‘870 Patent”), entitled “Didemnins and Nordidemnins.” (WIPO/GRTKF/IC/30/9)

In its intervention, the United States noted that the WIPO IGC is tasked to use an evidence-based approach including domestic legislation and examples of protectable and unprotectable subject matter (in relation to genetic resources). While acknowledging the hypothetical nature of its inquiry in applying the Swiss ABS regulations to a US patent, the US noted by considering national laws and state practice, the IGC could develop a shared understanding of key terms. 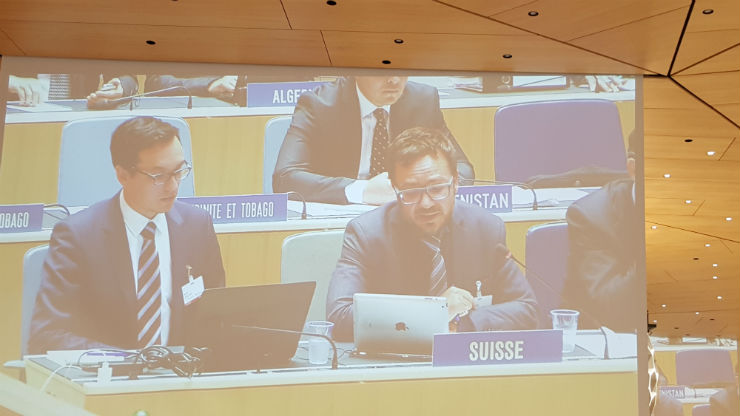 Australia entered the fray noting its support of Switzerland’s position and noting its commitment to an “open and fact based engagement.” Ghana expressed support for Switzerland and Australia noting that the United States had prefaced their submission by stating they were giving examples of national experience; however, Ghana noted that the United States did not present its own national experience and characterized the US paper as “misleading.” India supported “Switzerland in their contention on how the US document” was presented and noted that the US submission did not “set a good precedent” for the Committee’s discussion which India characterized as “open, frank and fact-based”.

Despite the frosty reception, the United States paper received, it appears that the United States has no intention of withdrawing its document from the set of working documents of the WIPO IGC. As long as the mandatory disclosure requirement remains anathema to the Canada, Japan, Republic of Korea and the United States, it is unclear how WIPO will untangle this Gordian knot.