On October 4th, 2016, Knowledge Ecology International (KEI) delivered this opening statement on the occasion of the Fifty-Sixth Series of Meetings of the Assemblies of the Member States of the World Intellectual Property Organization (WIPO).

We are pleased that on September 30th, 2016 the Marrakesh Treaty came into force. Millions of persons who are blind or have other disabilities will benefit from this. This was the first WIPO treaty that was proposed and supported by consumer interests, to expand the rights of users of copyrighted works. The Marrakesh treaty shows that it is possible to reshape the copyright regime so that it works better for society, and addresses the legitimate interests of both users and creators of knowledge goods. It should not be the last. 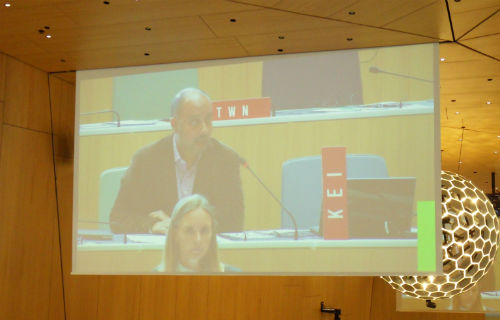 We are concerned that the European Union is proposing a so-called ancillary copyright regime, that will reduce access to knowledge, and conflict directly with the two mandatory user rights in the Berne Convention. Article 10.1 of the Berne Convention mandates exceptions for quotations, and Article 2(8) says that protection “shall not apply to news of the day or to miscellaneous facts having the character of mere items of press information.” These two mandatory user rights were designed to protect the public’s access to knowledge, and also to protect the authors and others involved in the production of knowledge.

WIPO should have a work program on user rights in copyright, and that work program could start with initiatives to implement the existing user rights, including those found in the Berne Convention and the WIPO Marrakesh Treaty.

On September 14th, 2016, the United Nations Secretary-General’s High-Level Panel on Access to Medicines released its Final Report. The most important recommendation from the UN experts is to delink the cost of R&D from the prices of medicines.

The SCP should discuss all of the recommendations in the UN HLP report, including those relating to limitations and exceptions on patent rights, but also to those relating to the delinkage of R&D costs from drug prices.