Wednesday, March 8, 2017, the Office of the United States Trade Representative (USTR) will hold the first Special 301 Hearing of the Trump administration. This year, USTR received 63 submissions in advance fo the hearing from governments, civil society organizations, and industry groups.

This blog post pulls out interesting selections from the various submissions, and includes as attachments the submissions of selected organizations.

Knowledge Ecology International (KEI)‘s comments for this year are available here. This year, KEI focused on the misuse of employment data by industry groups to argue for expanded IP protection, particularly a 2016 USPTO study that misleadingly bolsters employment attributable to IP-intensive industries by including “trademark-intensive industries,” such as grocery stores, in their count. KEI also recommended that the Trump administration improve transparency in trade negotiations and explore the progressive delinkage of research and development costs from drug prices, through, for example, the expansion of the orphan drug tax credit.

Public Citizen criticized USTR for its past attacks on the use of international public health flexibilities and rights — especially the use of compulsory licenses — in past Special 301 reports. To remedy the situation, PC asked USTR to adopt principles to guide the Special 301 review process, and in particular to omit “expressed or implied references to countries’ public interest practices that comply with international treaty obligations,” including actions taken in compliance with the TRIPS agreement. In particular, PC asked USTR to stop criticizing countries for not adopting U.S. policy preferences, even when those countries had no obligation to do so. “Pharmaceutical or other public policy disagreements should never land a country on the Priority Watch List” (emphasis in original), Public Citizen wrote.

Michael Palmedo of the American University Washington College of Law Program on Information Justice and Intellectual Property emphasized the benefit of “open, flexible and general limitations to copyright law” for U.S. businesses, and asked USTR to focus on “countries that are moving to adopt more flexible copyright practices in its ‘Best Practices.’”

Noting that the “fundamental rights” of Colombian citizens should take priority over U.S. trade interests, Fundación Karisma, Ifarma, and Misión Salud submitted joint comments highlighting the disconnect between USTR’s stated respect for the use of compulsory licenses in past Special 301 reports and its attempt to block Colombia’s compulsory license on the expensive leukemia drug Glivec. The groups also argued that the “unilateral adjudication of trade disputes through the Special 301” violates the Dispute Settlement Understanding of the WTO.

Doctors Without Borders/Médecins Sans Frontières (MSF) submitted testimony urging USTR to “respect legal safeguards such as India’s strict patentability criteria; its right to issue compulsory licenses when deemed necessary in the interest of ensuring the right to health; and a balanced approach in the enforcement of private IP protections.” MSF also also noted their concerns with pressure on Colombia over their proposed compulsory license on imatinib, stating that no country “should be penalized” for protecting public health.

The Software Alliance (BSA) asked USTR to put Argentina, Chile, China, India, Indonesia, Russia, Ukraine, and Vietnam on the Priority Watch List and Brazil, Greece, Kazakhstan, Korea, Mexico, Nigeria Romania, Thailand, and Turkey on the Watch List. They also noted Spain as a country and the EU as a region of concern.

The Biotechnology Industry Organization (BIO) touted the economic, public health, and employment benefits of the biotechnology industry, citing industry-funded research the development of cures for HCV, and the falling rate of cancer deaths, amongst various other indicators. BIO identified “practices that undermine biotechnology innovation,” including patent backlogs, the use of compulsory licenses, restrictive patentability criteria, and regulatory data protection failures.

As is their normal practice, BIO also recommended a list of countries to be included on the various Special 301 lists. Of particular interest are BIO’s criticisms of Colombia for its attempt to issue a compulsory license on the leukemia drug imatinib (more here: /colombia), Canada over its rare use of injunctions to block patent infringement, India over section 3(d) of its Patents Act and the grant of a compulsory license on Nexavar, and Thailand for the use of compulsory licenses.

* = also requested Out of Cycle Review

PhRMA also suggested that USTR monitor China under section 306 of the Trade Act.

“Some governments, including India and Indonesia, have issued compulsory licenses that allow local companies to make, use, sell or import particular patented medicines without the consent of the patent holder. Other governments, including Chile, Colombia, Peru, Russia, Turkey and Vietnam, have adopted or are currently considering resolutions, laws and regulations that promote or provide broad discretion to issue such licenses. PhRMA believes governments should grant compulsory licenses in accordance with international rules and only in exceptional circumstances and as a last resort. Decisions should be made on public health grounds through fair and transparent processes that involve participation by all stakeholders and consider all the facts and options.”

PhRMA also cited research by Read Beall, Amir Attaran, and Randall Kuhn to argue that compulsory licenses are not effective in lowering prices:

The Alliance for Fair Trade with India (AFTI), an industry interest group run by the well-connected lobbyist Brian Pomper of Akin Gump, asked USTR to place India on the Priority Watch List and to conduct an Out-of-Cycle Review on India this year.

Though they noted positive developments in India’s patent and copyright policy and law, the U.S.-India Business Council (USIBC) echoed many of AFTI’s concerns in their submission, including with regards to profiting through online advertising by copyright pirates, section 3(d) of the Patent Act, and the use of compulsory licenses. On compulsory licenses, they wrote that “Compulsory licenses should only be granted in exceptional circumstances and as a last resort as they do not provide sustainable solutions to longer term challenges.”

In contrast to AFTI and USIBC, the Confederation of Indian Industry defended India’s patent system, noting efforts to reduce the backlog and improve IPR enforcement. The Confederation also defended India’s right to use TRIPS flexibilities, such as compulsory licensing, and to resist the imposition of TRIPS+ policies, citing with approval the United Nations Secretary-General’s High-Level Panel on Access to Medicines Report, as well as an article by Nobel Prize winning economist Joseph Stiglitz and Senator Bernie Sanders.

The Computer & Communications Industry Association (CCIA) represents a range of technology companies, and this year submitted comments on the relationship between the cross-border trade in goods and services, intellectual property law, and the internet.

CCIA argued that European ancillary copyright laws, known as “snippet taxes,” harmed U.S. trade with Europe. “The effect of these laws is to force U.S. search providers and other online services to pay simply to quote from publicly available news publications,” they wrote. Germany and Spain received special attention as the “most problematic examples of snippet taxes,” although CCIA also focused on France and EU ancillary copyright efforts.

Moreover, CCIA took note of lack of adequate protections of “U.S. firms operating as online intermediaries” in the EU and Australia.

Notably, CCIA did not ask USTR to use its watch list powers to single out any of the countries discussed in their submission. Instead, CCIA asked that USTR “should make clear that the Berne Convention’s quotation exception and the safe harbor provisions required by the Intellectual Property chapter of U.S. Free Trade Agreements are mandatory commitments that the U.S. Government intends to enforce.”

While the Chamber did not make recommendations as to which countries should be included on the watch list, it focused the bulk of its written comments in evaluating perceived failures in the following countries:

The Chamber claimed that the declaration of public interest on Glivec by the Colombian government “undermines the legal certainty critical to an effectively functioning IP regime in Colombia.” With regards to India, the Chamber expressed their concern over India’s support for the findings of the HLP on compulsory licensing, and also attacked section 3(d) of the Patent Act, calling it an “additional ‘fourth hurdle’ with regard to inventive step and enhanced efficacy that limits patentability for certain types of pharmaceutical inventions and chemical compounds.”

The National Association of Manufacturers (NAM) provided this helpful chart: 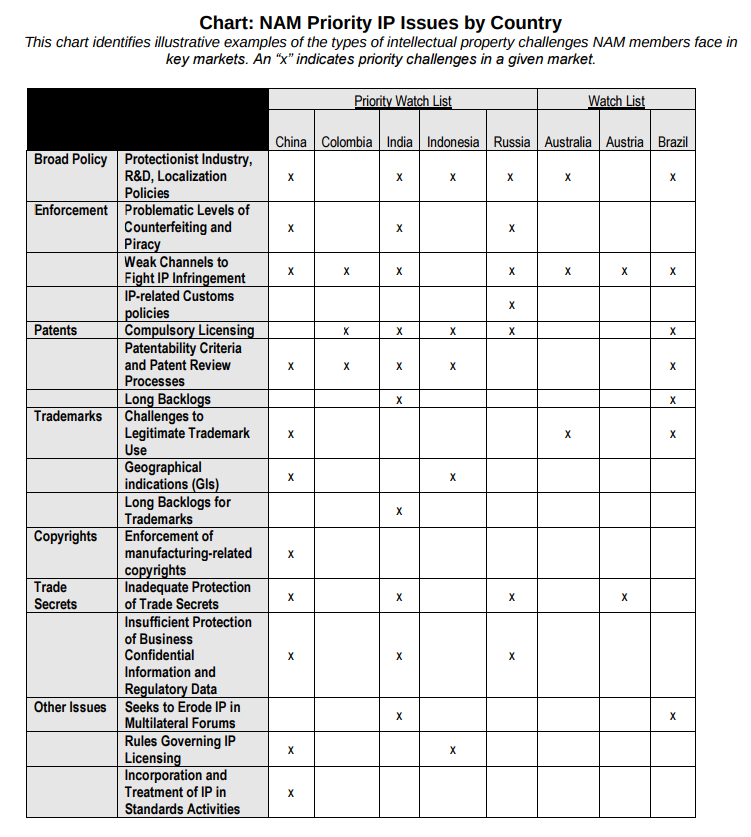 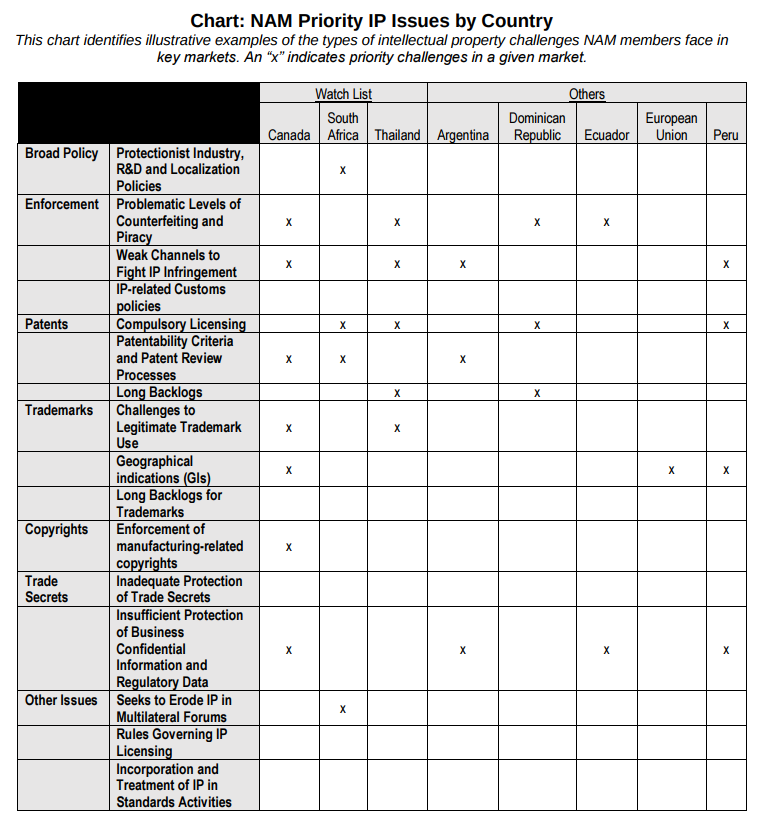 IIPA identified “key challenges” to the copyright industry, including:

IIPA also raised concerns about the use of pirated materials in educational contexts, asking USTR to pressure Taiwan to “Take action against book piracy at educational institutions, including against providers of on-demand printouts of pirated e-books, and against digital piracy on online education platforms” and Canada to prioritize a review of its education amendment to the fair dealing exception in the context of “the crisis in the educational publishing market.”