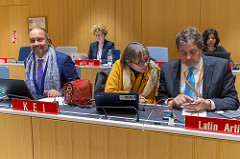 After discussing the Broadcasters, cablecasters and webcasters treaty also called by some the “youtube” Treaty, the Committtee moved on to limitations and exceptions issues. As the Deputy Director General, Sylvie Forbin noted in her presentation at the opening of the plenary today “the countries with the most sophisticated copyright system also have the most sophisticated limitations and exceptions provisions in their laws.”

There were few individual member states taking the floor after the regional groups made their statements but quite a few NGOs some representing libraries and archives other authors and publishers.

KEI made the following statement:

We would like to thank the Deputy Director General for her presentation of the detailed and forward looking plan of action on limitations and exceptions.

It usefully unpacks or may unbundle the many issues linked to limitations and exceptions and when put in motion it will clarify and facilitate progress in the area of L&E.

Like Grulac and the Asian Pacific group, we believe L&E is a critical issue for individual as well as society. And, as we seek to close the gap for dissemination of knowledge, we are not prejudging of possible solutions including binding and non binding instrument.

A balanced copyright system must not only provides protection and remuneration for authors and their works but also ensure access to knowledge.

The committee should continue to engage on the possible approaches for an international harmonization of limitations and exceptions to international rights and related rights.

1. Regarding possible future works we believe the committee could engaged in the drafting of a model laws for libraries, archives, museum, educational institutions and persons with disabilities.

3. We believe that an updated searchable database of exceptions and limitations for libraries, archives and museums would also be extremely useful

4. We agree with others that the analysis of issues related to the cross-border context including digital uses is quite important.

5. Finally, we would like to ask the Secretariat to assess whether the 1971 Berne Appendix for developing countries has been a successful and useful instrument and if not, why not.