According to the complaint, Remicade, J&J’s biologic drug for the treatment of certain chronic immune disorders, enjoyed monopoly status from its entry in 1998 through 2016, until the entry of Pfizer’s biosimilar, Inflectra, and Merck’s biosimilar, Renflexis, in 2017. Walgreen and Kroger allege that the biosimilars have gained only de minimis share of the infliximab market as a result of J&J’s exclusionary scheme, which included exclusive contracts with payors wherein insurers agreed not to cover the biosimilar products or to cover only in cases where Remicade fails first (and which, according to the complaint, is an illusory exception given that if Remicade failed, a physician would turn to a non-infliximab drug rather than a biosimilar). These exclusionary contracts were allegedly forced upon insurers through a coercive program of rebates conditioned upon the insurer not reimbursing for the biosimilars.

Walgreen and Kroger assert that this behavior has resulted in a miniscule uptake in the biosimilars of less than 5% of the infliximab market, and constitute violations of the Clayton Act. 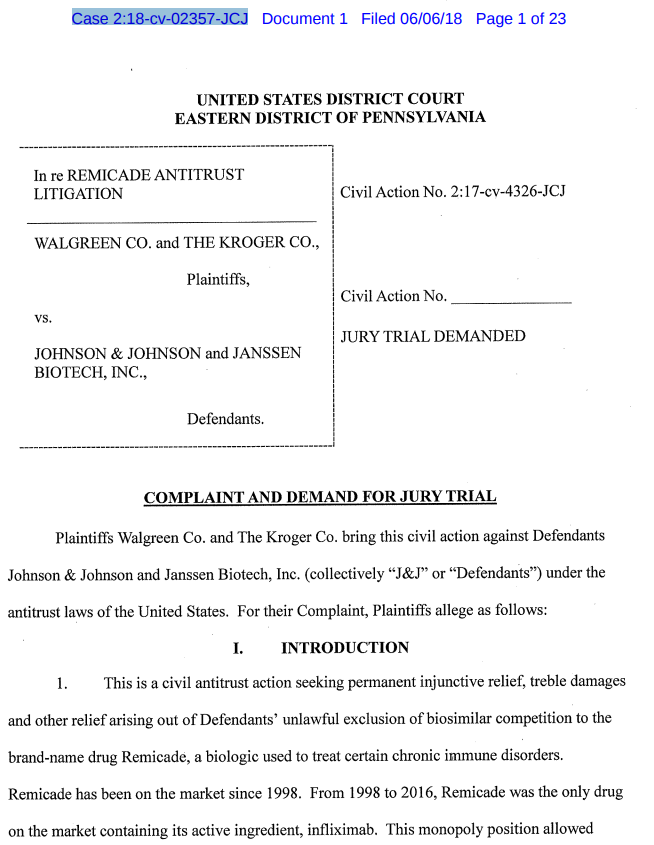 The average list price for Remicade is $4,000 per dose, and approximately $25,000 per year. Merck and Pfizer’s biosimilars are priced at approximately a 35% discount to the Remicade WAC price.

This lawsuit follows on a case filed in September 2017 by Pfizer against J&J with the same allegations, and a class action lawsuit filed in October 2017.