On Thursday September 27, 2018, the third UN High-Level Meeting on Non-communicable Diseases (NCDs) was held at the UN headquarters in New York. During the meeting, civil society participants could choose to attend the opening/plenary/closing segments or the two multi-stakeholder panels. The multi-stakeholder panels were described as including a panel of featured speakers and then an interactive segment wherein attendees could request to give 2 minute statements. KEI attended the multi-stakeholder panels in order to offer comments on the political declaration adopted that day. 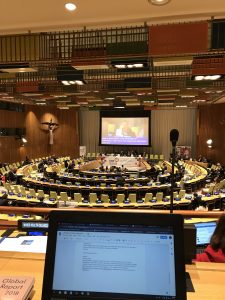 During the first panel (on strengthening health systems and financing for the prevention and control of NCDs), many panelists and Member States spoke of the challenges presented by NCDs in their communities and the need for major changes in funding and education regarding healthy lifestyles. Few discussed access to treatments for NCDs, and no one mentioned the high prices of medicines to address illnesses such as cancer, diabetes, and other rare diseases. During the interactive segment of the multi-stakeholder panel, only one civil society group was recognized to speak, the International Federation of Pharmaceutical Manufacturers and Associations (IFMPA). Besides being the only civil society group allowed to speak in the first panel, IFMPA was recognized prior to other Member States seeking the floor.

In the afternoon panel session on multisectoral partnerships to address the prevention and control of NCDs, one of the featured panelists, Sir Trevor Hassell of the Healthy Caribbean Coalition, offered strong words regarding engaging in partnerships. He cited the need for strict engagement principles in order to manage conflicts of interest, and called for partnerships in which “private industry is involved in partnership implementation but not in policy development.”

However, disappointingly following those strong words, the first civil society group to be recognized during this panel was the International Food and Beverage Alliance, whose remarks preceded many other Member States, including the United States. Only two more civil society groups (NCD Alliance and Young People’s Chronic Disease Network) were recognized to speak during the session, although more than 100 had requested the floor. YP-CDN offered strong remarks regarding the political declaration, lauding it’s recognition of the Doha Declaration and the need for TRIPS flexibilities and demanding that “people win first, industry win second.”

KEI had remarks prepared, but was never recognized to speak by the panel chairs. Below is the text of KEI’s comments:

Knowledge Ecology International was pleased to see that in the draft declaration text as of September 19, 2018, language was included in OP 20 which reaffirmed the 2001 WTO Doha Declaration on the TRIPS Agreement and Public Health and supported its interpretation and implementation in a manner to support public health and access to medicines for all, which would include treatments for cancer, rare diseases, and other expensive NCD treatments whose high prices lead to unequal access.

However, there are areas where the declaration is a disappointment.

While noting the need for affordable treatments, the declaration does not acknowledge that prices for new drugs, vaccines, and diagnostics for NCDs are excessive or prohibitively high. In fact, the word price does not appear at all in the declaration.

The declaration encourages multi-sectoral partnerships, but the risks associated with conflicts of interest are mentioned only briefly, in OP27, and based upon experience, the risks are understated.

Most important, when considering the mobilization of resources to prevent and control NCDs, innovative financing is only referenced through the lense of voluntary mechanisms. But clearly new approaches to finance biomedical innovation that delink incentives from prices are needed to to bring policy coherence to the twin objectives of innovation and access.