Through a Freedom of Information Act request, KEI has obtained records relating to US Trade Representative Ambassador Robert Lighthizer’s attendance at the 2018 World Economic Forum in Davos, Switzerland. While many of the records were related to scheduling and re-scheduling matters, the responsive records contained several items of note.

The negotiations over the scheduling of the bilateral meetings was the primary focus of the emails we received in the FOIA response. While Davos is known as a gathering of corporate executives, Lighthizer spent most of his time meeting with other government officials involved in trade negotiations.

On January 3rd, Tim Reif (USTR) recommended that Amb. Lighthizer meet with two groups of individuals for bilaterals, stating the top goal of these meetings would be to “build support, primarily in Europe and Japan, for addressing the China challenge and, in particular, for upcoming U.S. actions in regard to China, particularly the 301 on IP/innovation.” He recommended the following individuals (although the reasons he gave for each was redacted):

The records also included a memo from January 12th, indicating both the meeting requests received by Amb. Lighthizer and those sent by USTR.

Meeting Requests Sent or To be Sent by USTR:

The final ‘advance’ memos for all bilaterals for Amb. Lighthizer assembled by his Confidential Assistant Trevor Guy on January 24, 2018 (pages 52-63) outline Amb. Lighthizer’s schedule for his two days in Davos, and who was successful in securing a bilateral.

Overall, Amb. Lighthizer seems to allot half an hour for bilaterals with foreign ministers, with the exception of the Mexican Secretary of Economy Ildefonso Guajardo with whom he had dinner. Additionally, while setting aside 13 minutes for the CEO of Dow Chemicals (who reached out to USTR), USTR sought the meeting with John Neill, the CEO of Unipart Group, and had 45 minutes for cocktails with Mr. Neill.

The Unipart Group is a multinational manufacturing, logistics, and supply chain company based in the UK, but with operations throughout Europe, North America, Australia, and Japan. The company works across a variety of sectors including automotive and railway parts manufacturing.

One meeting that did not occur (not for lack of trying on the part of the company), was a bilateral meeting between Amb. Lighthizer and COO of Pfizer Albert Bourla. The records received via the FOIA contain an exchange between Pfizer and USTR, in which they were unable to arrange a meeting during Davos. This exchange was then forwarded to another contact in USTR by a third party, Ken Duberstein.

Ken Duberstein served President Ronald Reagan as White House Chief of Staff, Deputy Chief of Staff and Assistant to the President for Legislative Affairs, before forming The Duberstein group, which lobbies for major corporations such as Accenture, Amgen, Goldman Sachs, Comcast, PepsiCo, and Pfizer, among others. 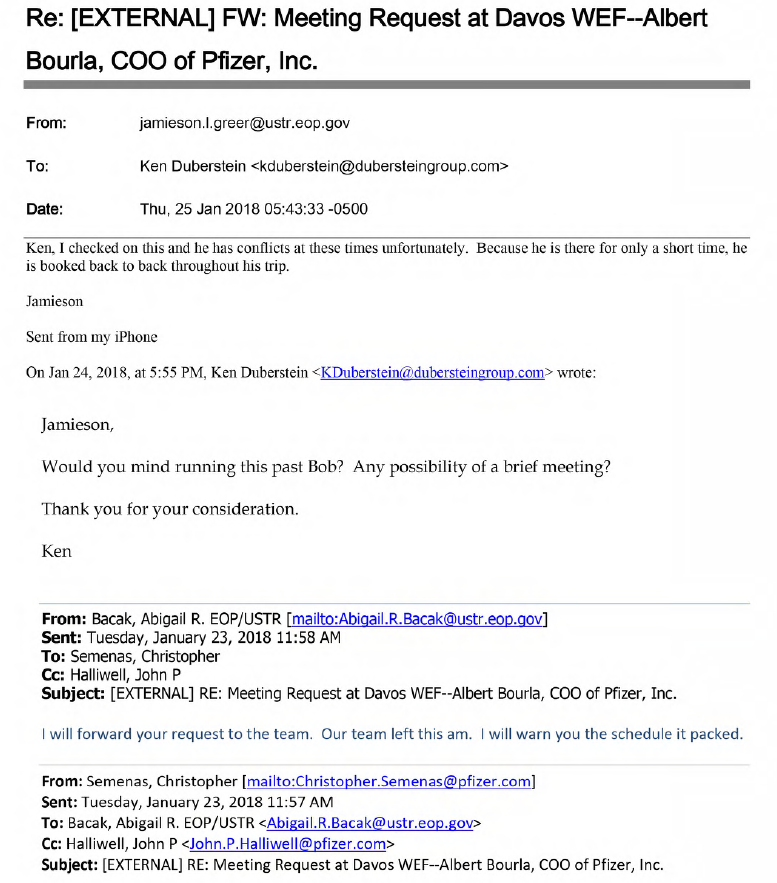 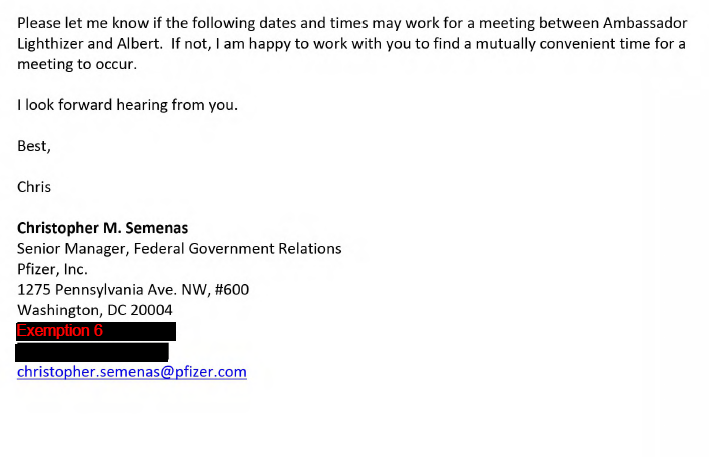 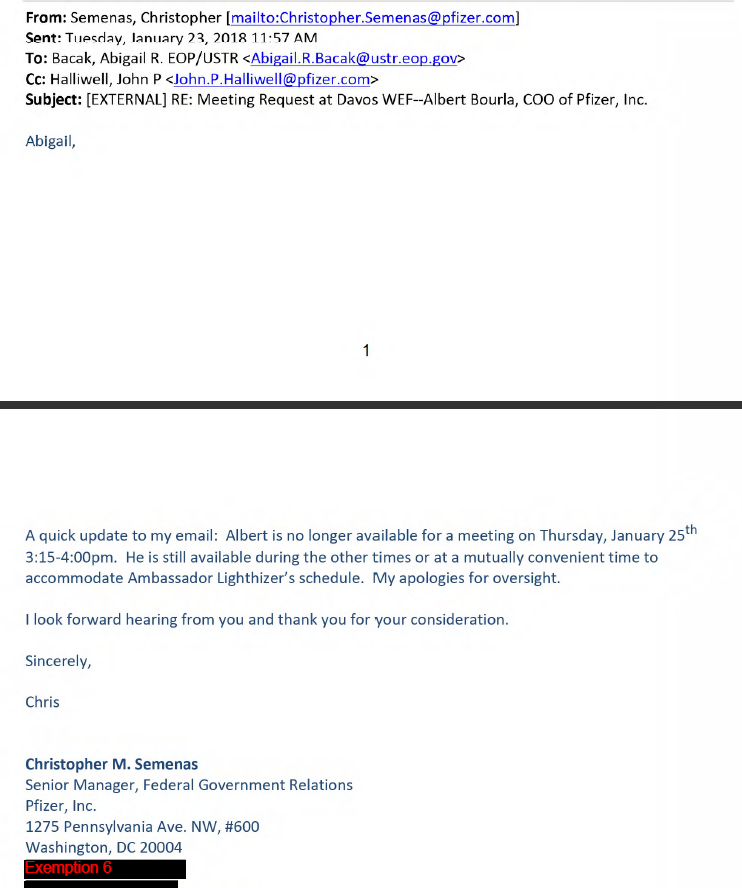 A copy of the records received via the FOIA request are available here.

Note: Amb. Lighthizer is often referenced in the records as “ARL.”