On August 5, 2020, BARDA Acting Director Gary Disbrow sent KEI and Public Citizen a letter (PDF copy) responding to KEI and Public Citizen’s joint letter outlining how Moderna failed to honor a term of its $1 billion COVID-19 vaccine contract and asking BARDA to address Moderna’s noncompliance. In the letter, Dr. Disbrow stated that BARDA will reach out to Moderna to “ensure their compliance with their contractual requirements.” Notably, Dr. Disbrow did not contradict KEI and Public Citizen’s interpretation of the straightforward language of the contract, which requires Moderna to make certain disclosures about federal funding in all press releases describing its vaccine candidate.

The relevant provision,  located at page 43 of the BARDA-Moderna vaccine contract, requires Moderna to disclose the following information, in all press releases and other documents describing Moderna’s COVID-19 vaccine program:

Not a single one of Moderna’s press releases complies with the contractual obligation. In a statement to Axios, however, Moderna claimed that it has complied with the disclosure requirement, because one of its press releases states that “BARDA will fund the advancement of mRNA-1273 to FDA licensure.” Moderna went on to state that it believes the press release statement makes clear that BARDA is funding 100 percent of the vaccine’s development. We appreciate Moderna’s later, more direct statement to Axios acknowledging that BARDA has financed 100 percent of the development of its vaccine candidate, but the statement from the press release comes no where close to satisfying the level of specificity required by the contract term, which requires percentages and dollar amounts. We also note that the scope of the contract extends beyond “advancement of mRNA-1273 to FDA licensure.” Page 5 of the contract, which was executed in April 2020 and obtained by KEI under the FOIA, lists as an option CLIN0003 – Domestic Manufacturing Scale-Out. CLIN0003 was exercised by BARDA/Moderna on May 20, 2020, making it part of the contract as well. Finally, a July 28, 2020 Moderna press release states that BARDA is partially funding the vaccine’s development, which is obviously not an accurate statement, given how Moderna has now admitted that BARDA is contributing 100 percent.

Moderna must incorporate, into ALL of its press releases past, present and future, a statement akin to the following:

These disclosures matter. Taxpayers deserve to know their relative contribution to the development of Moderna’s vaccine candidate. Even though the vaccine was jointly developed with the NIH, and even though U.S. taxpayers are financing 100 percent of the vaccine’s development, Moderna has floated a price for their vaccine candidate that is higher than all of the other contenders. The fact that U.S. taxpayers have funded 100 percent of the vaccine’s development weakens any argument for Moderna to charge a high price for it. Moderna cannot point to the high costs of drug development, and the risks and costs the company has assumed, in undertaking to develop the vaccine, as justifying a large profit.

It is unreasonable for Moderna to charge U.S. taxpayers twice for the vaccine candidate, but it is also in the interest of U.S. citizens that the vaccine is widely and affordably accessible throughout the globe. If Moderna nonetheless insists on overcharging Americans and residents of other countries for the vaccine, the U.S. government can intervene to stop their price gouging. The Bayh-Dole Act authorizes the federal government to issue a compulsory license to federally-funded intellectual property underlying the vaccine if Moderna fails to achieve practical application of the vaccine, which means that it fails to make the vaccine available to the public on reasonable terms. This includes Moderna charging an unreasonable price for the vaccine.

Now that BARDA has informed KEI and Public Citizen of its plans to ensure Moderna’s compliance with the contractual disclosure requirement, will be watching closely to see how Moderna proceeds. 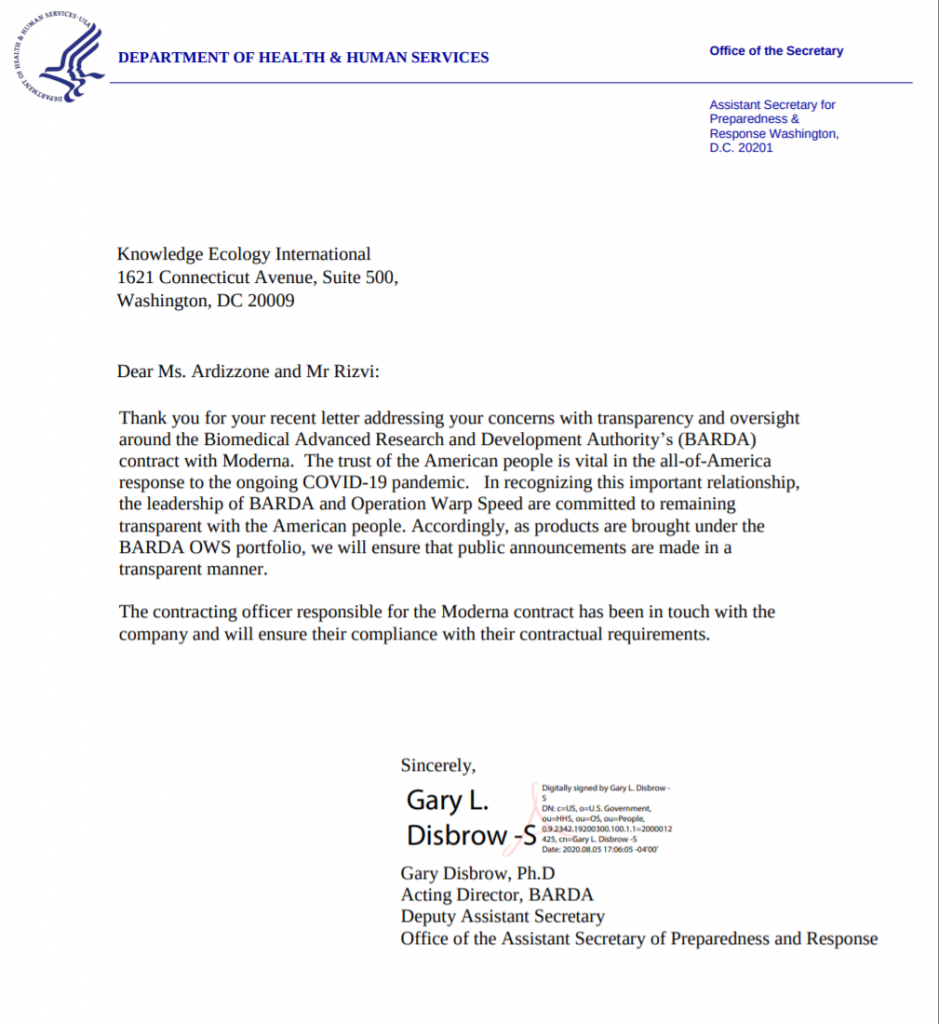