On Wednesday 20th January 2020, at the 148th session of the World Health Organisation (WHO) Executive Board, the issue of financing and implementation of programme budget 2020-2021, the draft proposed for programme budget 2022-2023 and the issue of sustainable financing were discussed. Some Member States, including China, the United Kingdom, Spain and Brazil, expressed concerns over WHO initiatives including the WHO Foundation and the WHO Academy. 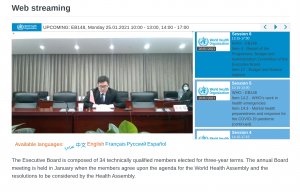 In particular, China required further clarification on the relationship between the WHO Foundation and WHO’s regular budget. China’s statement is reported below:

“We would like to seek further clarification from the Secretariat on this: would the budget increase affect the overall level of assessed contributions? What is the relationship between the WHO Foundation and the regular budget? According to the Secretariat presentation the current biennial budget including estimated funding has already reached 127% of the approved budget. We appreciate the funding efforts made by the Secretariat, which has allowed the programme budget and funding of the organisation to be secured and predictable. In the meantime, the programme budget and funding is a long-term and very challenging endeavour”.

Additionally, the United Kingdom expressed the need from the WHO to be fully transparent on the new WHO initiatives including the WHO Foundation and the WHO Academy, and to include them in a transformation strategy. The final part of the UK statement is reported below:

“The UK welcomes the DG’s assurances at PBAC last week, the new initiatives such as the WHO Foundation and WHO Academy are expected to be cost neutral in the longer term. We would however like to underline the need for transparency on all such new initiatives and their inclusion in a clear transformation strategy or plan to pre-empt such surprises in the future”.

On the other hand, countries including Brazil and Spain, required further clarification by the Secretariat on the role played by the WHO Foundation in the next biennium programme budget. The statements of Spain and Brazil are reported below:

Spain: “We thank the Secretariat for his offer to hold information briefings on the polio programme transition and we would like to also have further details on the functioning of the WHO Academy. The creation of a working group responsible for making specific proposals on the financial sustainability of the WHO is something that we support strongly. We think its principal task should include the identifying of alternative sources of financing, the creation of incentives to make the contributions of Member States more flexible, and, the definition of the role, in this respect, that should be played by the WHO Foundation”.

Brazil: “Brazil urges Member States and the Secretariat to equip the programme budget for the next biennium with the best tools to achieve the highest levels of transparency and accountability for all revenues, coming both from assessed and voluntary contributions, including the ones from the various new funds and from the WHO Foundation. I thank you”.

WHO Director-General Dr Tedros Adhanom Ghebreyesus responded to the statements advanced by Member states on the concerns over the WHO Foundation and WHO Academy among the WHO facilities, clarifying the following points.

“We wanted something fast, something big, something of good quality because, as you know, one of the blessings from you was really to change the organisation from the start, so we took it seriously as a team and that is why we have many initiatives. But I think there was one comment that says that we don’t need any initiatives. To be honest, I do not know where the communication gap is, but these initiatives were announced in 2018 and officially in 2019, March. It was a very long speech if you remember, all regional directors were involved and then we announced the WHO Foundation and the WHO Academy, among others”.

The WHO Foundation has set an ambitious target to raise $1 billion by 2023. The remit of the foundation includes raising money from high net worth individuals and the private sector (including for example, the pharmaceutical industry, soft drinks manufacturers, and the video-gaming industry). In fact, as reported by Devex and Politico in December 2020, the only two industries that are off limits to the WHO Foundation are the arms industry and the tobacco industry. It remains to be seen how the WHO Foundation’s engagement with the private sector (including the soft drinks, alcohol, and pharmaceutical industries) will affect WHO’s norms-setting activities.

Knowledge Ecology International»Blogs>>EB 148: China and the United Kingdom raise concerns over the WHO Foundation and other WHO initiatives