Spinal muscular atrophy (SMA) is a rare neuromuscular disorder, with an estimated incidence of between one and two cases per 10,000 births worldwide. The most severe form of the disease – SMA Type I – previously had close to 95% mortality rate by 18 months old (1), although proactive management and the emergence of disease modifying therapies have meant this has changed in recent years.

I spoke to Tasnim Jadwat, the founder of patient group Cure SMA South Africa and the mother of Iman, a 12 year old girl living in South Africa with SMA Type I.

KK: Thanks so much for reaching out to share your experiences. Tell me a bit about your story.

TJ: Sure. The first thing we noticed was that Iman wasn’t managing to hold up her head without support. My brother-in-law is a paediatrician which helped a lot. We went to our local doctor, who referred us onto a paediatric neurologist in Durban. They did various tests, but made a clinical diagnosis of spinal muscular atrophy even before we had the blood tests back. They told us Iman had three months to live, and we should just take her straight home and love her, that there wasn’t any point spending time doing anything else.

Of course, we got home and started Googling which always gives you the worst case scenario [laughs]. But we read online about a specialist hospital in the UK – Great Ormond Street Hospital (GOSH). We were fortunate enough to be able to go, and they did more tests there. We then found out about patient groups, specifically CureSMA in the United States (known as Families of SMA at the time). We’ve been to three conferences hosted by them in the States, and it was there that we learnt more about various treatment options from physiotherapy to suctioning to CPAP [Continuous Positive Airway Pressure – a form of non-invasive ventilation]. Through that we’ve visited various specialists in the States, from Dr Katherine Swoboda, now based at Boston University, who was able to get Iman started on Epilim. We felt at the time that that helped her a little, but the clinicians were not sure.

[Iman] has stayed so strong throughout this all. We had some really close moments – at one point she got RSV and was in ICU ventilated for 17 days, we thought she was close to passing then.

KK: And how did you decide to establish CureSMA SA?

When we first got the diagnosis, it was so difficult, we didn’t know what to do, we didn’t know of anyone else who had gone through that. But what we learnt from [the US], we tried to bring it home, and establish a network here. It’s mainly to educate others. We are part of Rare Diseases South Africa, and they have helped publicise our story. We even have some members from other countries in Africa.

We have got some media coverage – Iman has become quite well known through it here in South Africa.

KK: Wow. Have you managed to get access to any of the new therapies for Iman?

TJ: No. Access has been a huge issue. Whenever we have any media who wants to write about our story, I always try to make sure they include the issue of access to the medicines.

Here in South Africa, you can use Section 21 for a drug that isn’t registered for use here, but you have to cover the cost of the drug yourself. Medical Aid here don’t have SMA on the list, even though they cover Motor Neuron Disease (MND) for example. My husband is paying the highest bracket for Medical Aid cover, but that doesn’t seem to change anything, they still always refuse.

Iman even did a video for Biogen. The South African Biogen rep sent this to them and they flew over to South Africa. We thought, of course, that they would have the drug [Spinraza] in their bag for her, but they didn’t have anything! They came to assess the economic situation in South Africa and meet with the leading medical aid providers, but in the end it was a denial.

Roche has a global access programme [for Evrysdi], but despite Iman being diagnosed as Type I, they claimed she was a Type 2 as she can sit in a powerchair, even though she requires support for this, and so refused our application. The paediatric neurologist in Durban has tried 18 times to enter Novartis global access lottery for a child they were caring for, but had the application refused every time.

We have explored every option. When we heard that the UK was offering it we were looking into whether we could go there and apply for citizenship, but you need to have assets there and the cost of getting something would make it impossible. We have been exploring whether we can get Turkish citizenship – the process would cost just the same as 2 injections of Spinraza! But we haven’t been able to.

Even if you do fundraise, for example for Spinraza, how much are you going to fundraise? Who’s going to pay you forever?

Zolgensma is the ideal option, as it is a one off treatment. I have contacted another hospital in Hungary, but they refused as she was too old. I thought I had found a loophole for her to be treated somewhere in the EU as she weighs less than 21kg, which is one of the inclusion criteria, but we haven’t been successful.

As far as I know, no one has managed to get access to any of the [new drug] treatments in South Africa.

KK: Thanks so much for taking the time to speak, and share your story, Tasnim.

You can see Iman and Tasnim featured in a recent news piece: https://www.youtube.com/watch?app=desktop&v=DGWk6dGoSZo 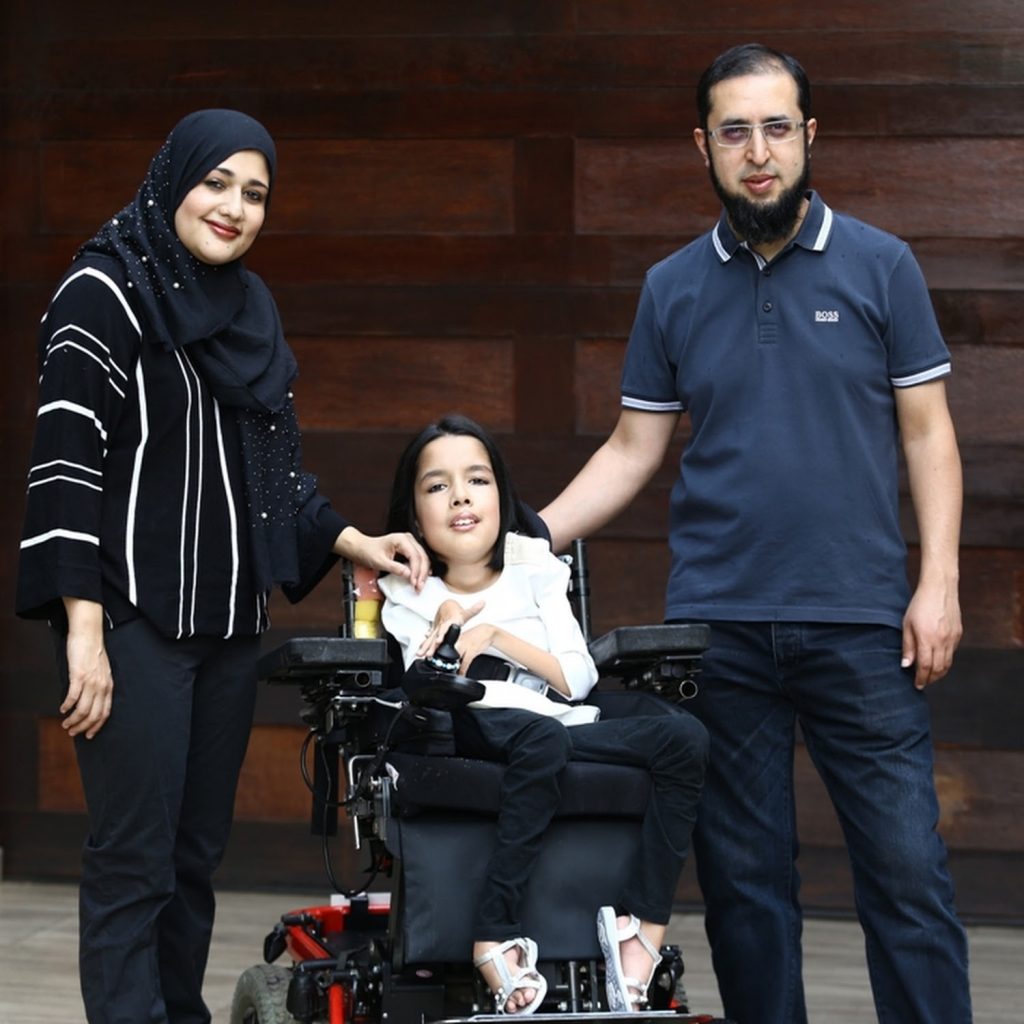 07/02/2019. Tasnim Jadwat and Muhammed Casoojee stand next to theirt daughter Iman Casoojee who is suffering from a life threatening spinal muscular atrophy that is costing them in the region of 4 million a year for her treatment.Picture: Masi Losi

Knowledge Ecology International»Blogs>>Interview with Tasnim Jadwat, regarding access to treatments for SMA