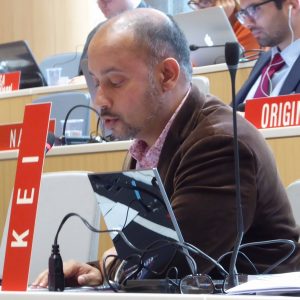 Thiru Balasubramaniam is the Geneva Representative of Knowledge Ecology International.

Prior to his post as KEI’s Geneva Representative, Mr. Balasubramaniam worked at Health Action International in Colombo and at the World Health Organization in Geneva as a technical officer in the Department of Essential Drugs and Medicines Policy dealing with access to medicines and intellectual property. During his first year at WHO, Mr. Balasubramaniam was a Global Health Leadership Fellow, supported by the Rockefeller Foundation and the United Nations Foundation. He began his career with CPTech working on issues related to health care and intellectual property.

Mr. Balasubramaniam holds a B.A. in Economics and a Minor in European History from the University of Pennsylvania.

I can be contacted via email: thiru [at] keionline.org