(For more resources, please see our page on molnupiravir.)

Knowledge Ecology International (KEI) has obtained a copy of the $1.2 billion contract between the U.S. government and Merck to advance purchase 1,696,629 treatment courses of molnupiravir, an investigational COVID-19 drug that is taken in pill form. (PDF Link)

According to the contract, the price per treatment course is $712.

KEI obtained the contract as part of its Freedom of Information Act (FOIA) lawsuit against the Department of Health and Human Services and the Army related to COVID-19 contracts executed by the U.S. government.

The contract, No. W911QY21C0031, was awarded by the Army on June 7, 2021. It has an upper limit of $3.7 billion. The agreement includes options to purchase additional courses of the drug, but quantities for those possible future purchases are redacted.

Section H.10, titled “Intellectual Property Rights,” is redacted under Exemption 4 of the FOIA, which is intended to protect trade secrets and commercial or financial information that is privileged or confidential, but is inappropriate here

When agencies receive FOIA requests for records that contain commercial information, they first notify the source of the information (in many cases, a contractor) that the request was received and provide a period of time for the company to object to the release of the record in whole or in part. In other words, when processing FOIA requests, agencies allow contractors to be heard as to the information they think should be shielded from the public.

The policy of seeking contractors’ input before releasing information to the public likely explains the variability of redactions across the USG’s COVID-19 contracts. KEI has obtained over 320 contracts or amendments related to COVID-19. In most of the contracts, IP terms are disclosed, although there are exceptions, which KEI is challenging in court.

Section H.15, titled “Subject Invention Not Expected,” states that the parties do not “expect that conception or reduction to practice of any Subject Inventions will result from performance under this contract.” This term, which also addresses intellectual property rights but is not redacted, is obviously directed at precluding the idea that any invention arising from the contract is a subject invention, as that term is defined by the Bayh-Dole Act of 1980, at 35 U.S.C. § 201(e). So here, where the text can be read to give investors a more favorable view of the potential profits, the company does not assert that an IP term is privileged.

There is an inconsistency between withholding the IP terms governing the agreement on the one hand and explicitly stating that the parties do not anticipate any invention arising from the contract on the other.

One possible motivation for the initial redactions is Merck’s desire to downplay the perception that the government holds rights in molnupiravir, per the Bayh-Dole Act. Merck is partnering with Ridgeback Therapeutics, a small biotech company based in Florida founded by a husband-wife team with backgrounds in finance, to develop the technology. Wendy Holman, the CEO of Ridgeback, participated in a webinar centered on discouraging the use of the U.S. government’s publicly-funded inventions to expand access to COVID-19 vaccines and treatments. She called march-in rights, which enable the government to authorize generic competition to alleviate health or safety needs or when a drug is priced unreasonably (among other reasons), “irrational” and “ridiculous.”

The contract includes a clause that allows the U.S. government to donate any unneeded doses of molnupiravir “to any foreign nation that has an active marketing approval in place for use of [molnupiravir] at the time of donation,” or that has an active regulatory authorization and entered into an indemnification agreement with Merck. Merck is obligated, under the contract, to work in good faith with the USG to ensure that the regulatory requirements and logistics needed to accomplish the donation are carried out.

The contract provides the USG with a limited technology transfer license:

a non-exclusive, nontransferable, irrevocable (except for cause), royalty-free paid up license to practice or have practiced for or on behalf of the U.S. Government any Merck Background Patent, Copyright, other Merck Intellectual Property, Merck Know-How, Merck Technical Data rights necessary to manufacture doses of [molnupiravir] subject to Merck’s ability to obtain the consent to sublicense under an applicable Ridgeback license, which Merck shall reasonably pursue in good faith;

The license also includes any necessary FDA filings or authorizations controlled by Merck and outstanding deliverables under the contract. While the scope of the license covers virtually everything needed to authorize generic manufacture of the drug, its use is limited by the need for Ridgeback’s consent, and three unlikely qualifying events

The operative provisions in Section H.12 are not only redacted in full, but the title is also redacted, making it impossible to know if or how any other provisions are modified.

This is how the “Special license” provision (H.14) is redacted. 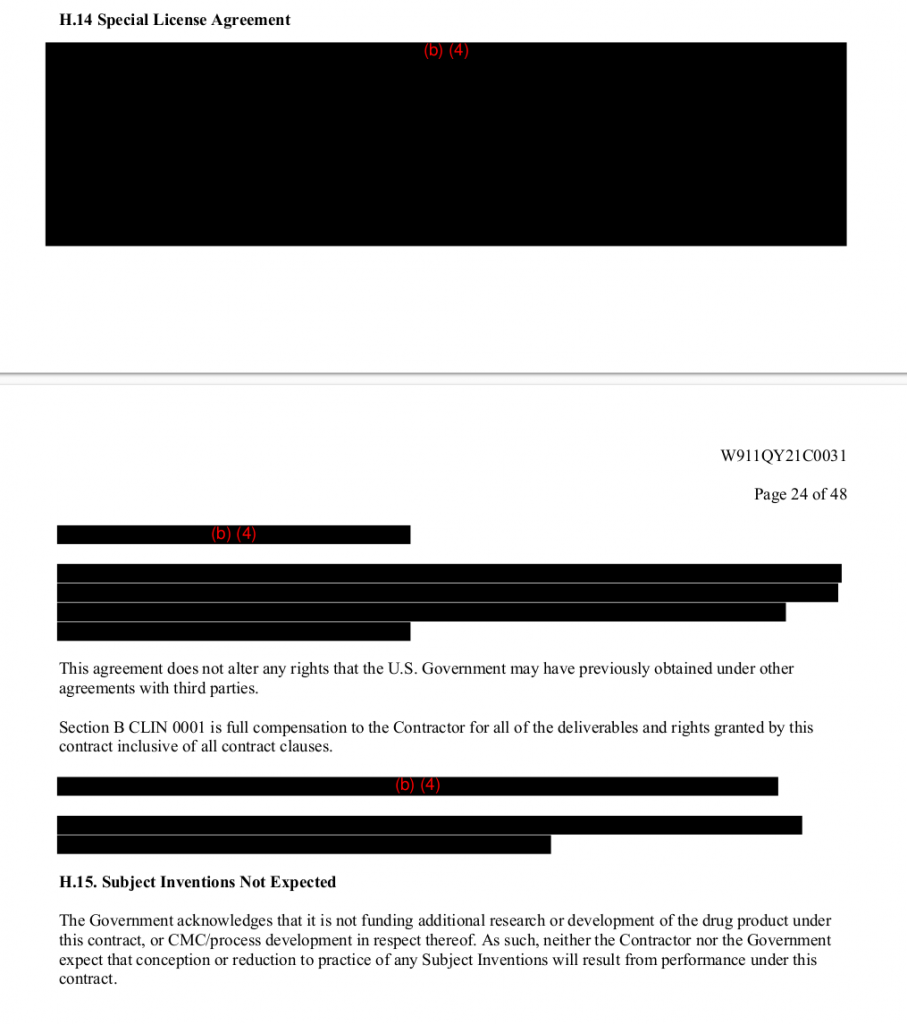