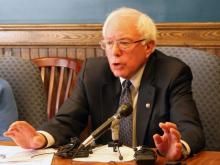 On Thursday, May 26, 2011, Senator Bernie Sanders (I-VT) introduced two bills in the United States Senate that would de-link R&D costs from drug prices. The bill names and numbers are as follows:

The federal government and private health insurance companies would co-fund the prizes, according to formulas set out in the bills. The cost of the prize funds would be more than offset by the savings from the introduction of generic competition for products.

Both bills have some similar features to Senator Sanders’ earlier prize fund bills, but there are also a number of changes. Among those changes are the introduction of an open source dividend element to the bills, which would have at least 5 percent of the prize money going to persons or communities that put knowledge, data, materials or technology into the public domain, or provide royalty free and non-discriminatory access to patents and other intellectual property rights. Annually, this would be more than $4 billion for S. 1137, and $147 million for S. 1138, at 2010 levels of GDP, as an incentive to open source research. Both bills also permit the creation of competitive intermediaries to manage prizes for interim technologies. The intermediaries would be non-profit entities that compete for funding from private insurance companies that share the cost of the prize fund. The Medical Innovation Prize Fund bill now includes some additional guidance regarding the valuation of antibiotics, or medicines and vaccines used in stockpiles for public health emergencies.

(3) By de-linking research and development incentives from product prices, and by eliminating legal monopolies to sell products, it is possible to induce investments that are medically more important, procure products at low prices from competitive suppliers, radically lower pricing barriers for access to new medicines, reduce wasteful marketing and research and development activities, and dramatically lower the overall costs of acquiring innovation, while expanding access to that innovation.

KEI has written a memo describing each bill, formatted as a PDF in both letter and A4paper sizes.

May 31, 2011. Dean Baker. Why pharma’s patents are a drug on the market: Senator Bernie Sanders proposes a major reform of the way we pay for prescription drugs and fund research. He’s patently right, the Guardian. Published also on June 1, 2011, as Bernie Sanders Tries Some Clear Thinking on Prescription Drugs, HuffingtonPost.Com.