This is part of a what will be a larger submission to the United States Trade Representative (USTR), objecting to trade negotiations that seek to force developing countries to grant and enforce more types of drug patents than is required by the WTO. The most recent example of is the Trans Pacific Partnership Agreement (TPPA) negotiation, involving the governments of Brunei, Chile, New Zealand, Singapore, Australia, Malaysia, Peru, Vietnam and the United States. (More on TPPA here). In the TPPA, USTR has proposed this language:

Explanation: For the purposes of this clause, salts, esters, ethers, polymorphs, metabolites, pure form, particle size, isomers, mixtures of isomers, complexes, combinations and other derivatives of known substance shall be considered to be the same substance, unless they differ significantly in properties with regard to efficacy.”

USTR is seeking to prevent other countries from modifying statutes or practices along the lines of the Indian example, which has been very effective in limiting the evergreening of patent protection on drugs.

This note focuses on the proliferation of patents on ritonavir, to illustrate why the TPPA text is important.

Background
Abbott Labs developed ritonavir on a government grant. The drug is a protease inhibitor, and has the unusual property that it can boost the efficacy of other protease inhibitor drugs when used as part of 4-drug antiretroviral treatment regimes that also include 2 drugs from the Nucleoside Reverse Transcriptase Inhibitor (NRTI) class of drugs. Abbott offers a co-formulated version of ritonavir and lopinavir, another protease inhibitor invented on the same federal grant. Abbott has refused to license its patents to firms that want to co-formulate ritonavir with non-Abbott drugs.

Of the 194 patents issued, 18 list Abbott as the assignee on the patent — roughly 1 of 10 patents issued. Another 11 of the patents, none assigned to Abbott, declare government rights due to federal funding (see below). In addition to the 194 patents that specifically mention ritonavir in the patent claims, another 42 patents cite the NIH contract that provided the early funding for ritonavir research and development. 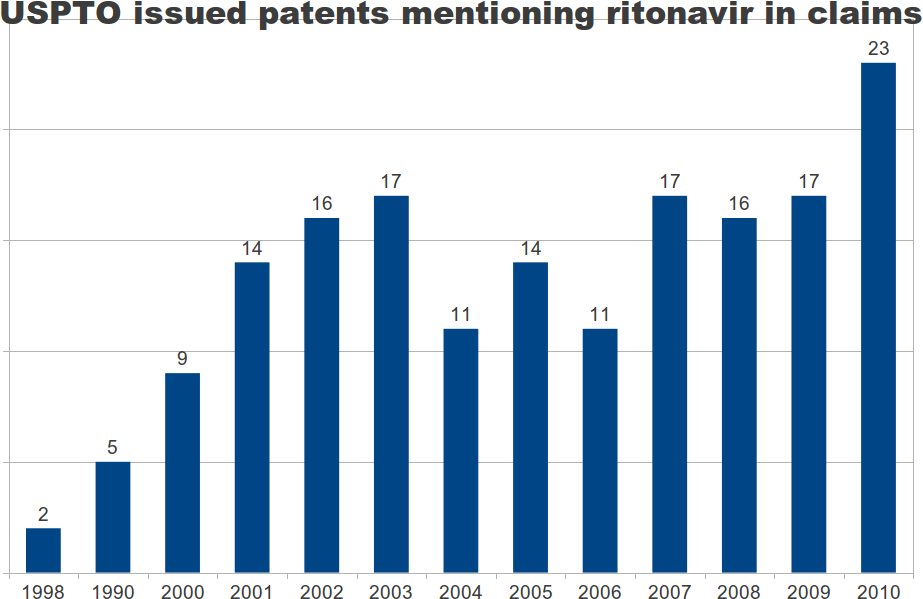 The 2004 March-in case
Several of the early Abbott owned patents that were listed in the FDA orange book for ritonavir contain this disclosure:

This invention was made with Government support under contract number AI27220 awarded by the National 5 Institute of Allergy and Infectious Diseases. The Government has certain rights in this invention.

In 2004, Essential Inventions filed a US march-in case, requesting the government grant open licenses to use the following Abbott owned ritonavir patents:

None of these patents used the term ritonavir in the patent claims.

The 2004 petition was denied by the Bush Administration. For details of the 2004 case, see: http://www.essentialinventions.org/drug/ritonavir.html

Including the 6 patents above, some 42 patents, all assigned to Abbott, have references to the NIH contracts and disclose U.S. government rights under the Bayh-Dole Act. 39 of the 42 patents list Dale J. Kempf as an inventor, while 3 do not. There appear to be some errors in the patent database. Five of the patents that disclose the NIH contacts do not report the information in the correct USPTO data field (5354866, 5545750, 5631376, 5670675, 6531610). Also, the NIH contracts are reported either as A127220, Ai27220 or Al27220, suggesting either different contracts, or that some versions of the letters i,l and the number 1 were typos. None of these patents include the term ritonavir in patent claims.

Patents mentioning ritonavir in claims that declare government rights
As discussed, Abbott is the assignee for 42 patents that reference the NIH grant leading to the development of ritonavir, none of which specifically mention ritonavir in the patent claims.

There are eleven non-Abbott patents that mention ritonavir in their claims disclose federal rights in the patent.

How does ritonavir compare to other antiretroviral drugs? Using the FDA’s preferred generic name for the API, it has the most. The drug with the second most patents cited in the claims is zidovudine, with 178.

Looking at all of the AIDS drugs, the longer a product is on the market, the more frequently the API is cited in patent claims. 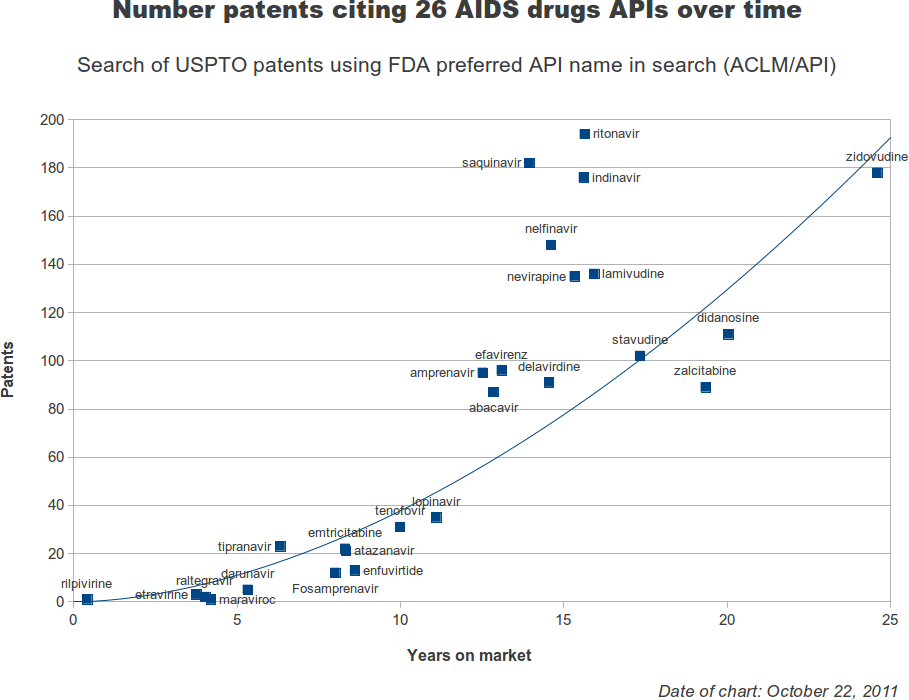 Identifying relevant patents
In these searches, I only used one search term to identify the API. By using more variants, the USPTO database provides additional hits. For example, using both zidovudine and AZT as search terms, there are 483 issued patents, more than for ritonavir alone.

I could dig deeper, and find more patents for most if not all ARVs listed above. On the other hand, not every citation of an API in a patent claim is going to be relevant. A more sophisticated analysis of the ritonavir patent landscape was recently provided by WIPO.

The following excepts are from an August 19, 2011 report on the patent landscape on ritonavir, prepared for WIPO by Landon IP. A copy of the report is available from WIPO here. Using a different and more sophisticated methodology, the Landon study identified 805 families of patents that “protect different aspects of Ritonavir and its methods of use.”

The WIPO patent landscape report project is based on the Development Agenda project DA_19_30_31_01 (“Developing Tools for Access to Patent Information”) described in document CDIP/4/6, adopted by the Committee on Development and Intellectual Property (CDIP) at its fourth session held from November 16 to November 20, 2009.

Executive Summary
This report is a patent landscape on Ritonavir. Ritonavir is an antiretroviral drug from the protease inhibitor class used to treat HIV infection and AIDS. Ritonavir is included in the WHO Model List of Essential Medicines (EML)1. The originator company is Abbott Laboratories, which markets Ritonavir under the brand name Norvir, or in combination with the protease inhibitor Lopinavir, as Kaletra or Aluvia. The U.S. Food and Drug Administration (FDA) approved the drug in March 1996 for oral solution and in June 1999 for capsules. Abbot later received FDA and European Medicines Agency (EMEA) approval in 2010 for a heat?stable formulation of a 100mg Ritonavir tablet. This has particular importance for developing countries with elevated ambient temperatures.

A major goal of this project is to highlight the technology timeline for Ritonavir from the first filing of this compound in December 1993 by Abbott Laboratories (WO1994014436) to the present filings in which additional patent families attempt to protect subsequent innovations to the compound, variants and derivatives, combinations with other chemicals, methods of production, methods of use, etc. The identification and analysis of these patent documents showed that filings related to Ritonavir have increased dramatically since the initial disclosure and now include over 800 patent families. A patent family is a collection of interrelated patents that often contain the same disclosure and are typically related through dependence on a common priority document or documents. On average, 45% of the patent families identified during this patent landscape include at least one grant of a patent in one jurisdiction and thereby directly protect the various aspects of Ritonavir mentioned above.

This landscape report identified most patent families were initially filed in the United States. The most common assignee was identified as Abbott Laboratories. Nearly all documents are assigned to large pharmaceutical corporations with a minimal number of patents and applications assigned to universities and small pharmaceutical companies.

This report identified a number of innovation tracks that spun?off of the first Ritonavir patent document, WO1994014436. These are related to liquid dosage formulations, solid dosage formulations, synthesis of Ritonavir and its key intermediates, and polymorphs and crystalline Ritonavir. These innovation tracks illustrate important protection related to Ritonavir as subsequent generations continue to narrow the scope of protection in a wide area of technologies while still maintaining protection from the first Ritonavir Patent, a phenomenon that is also sometimes termed “evergreening”.

The single largest area of patenting is related to combination therapies. These documents were not included as an innovation track because of the lack of interrelation between the claims. These documents describe new pharmaceutical agents. The formulations containing new agents also include Ritonavir because it has been shown to be a powerful secondary protease inhibitor. Patenting in the area of combination therapies containing Ritonavir as a secondary protease inhibitor is also expected to increase in the future. There appears to be a large amount of filings for liquid dosage forms and structural information for Ritonavir.

This report was prepared to illustrate the complex nature of patent protection and statistical trends related to Ritonavir. There have been over 800 patents filed since the initial PCT application WO1994014436 to protect different aspects of Ritonavir and its methods of use. A large number of documents filed subsequent to the initial application still protect the structure of Ritonavir as described in the initial application. As one would suspect, subsequent patent filings continue to narrow the focus of protection of Ritonavir by incorporating novel aspects to the subject of Ritonavir. The implications of patent protection are important for developing countries to consider. Simply licensing the initial key documents will not provide adequate freedom to operate because of the breadth of coverage by subsequent patents. The statistical analysis shows there has been increased filing activity since the initial disclosure, exclude the past two years. These filing trends are expected to continue to increase. Abbott Laboratories is the most assigned company and continues to file in a variety of areas related to Ritonavir including crystal structure and combination therapies comprising Ritonavir. A majority of assignees are large pharmaceutical corporations with universities making a very small minority. The statistical analysis also shows the most common countries for filing applications are the United States followed by the European Patent office. The statistical analysis also shows 88% of patent families file PCT applications. This trend is expected to continue. 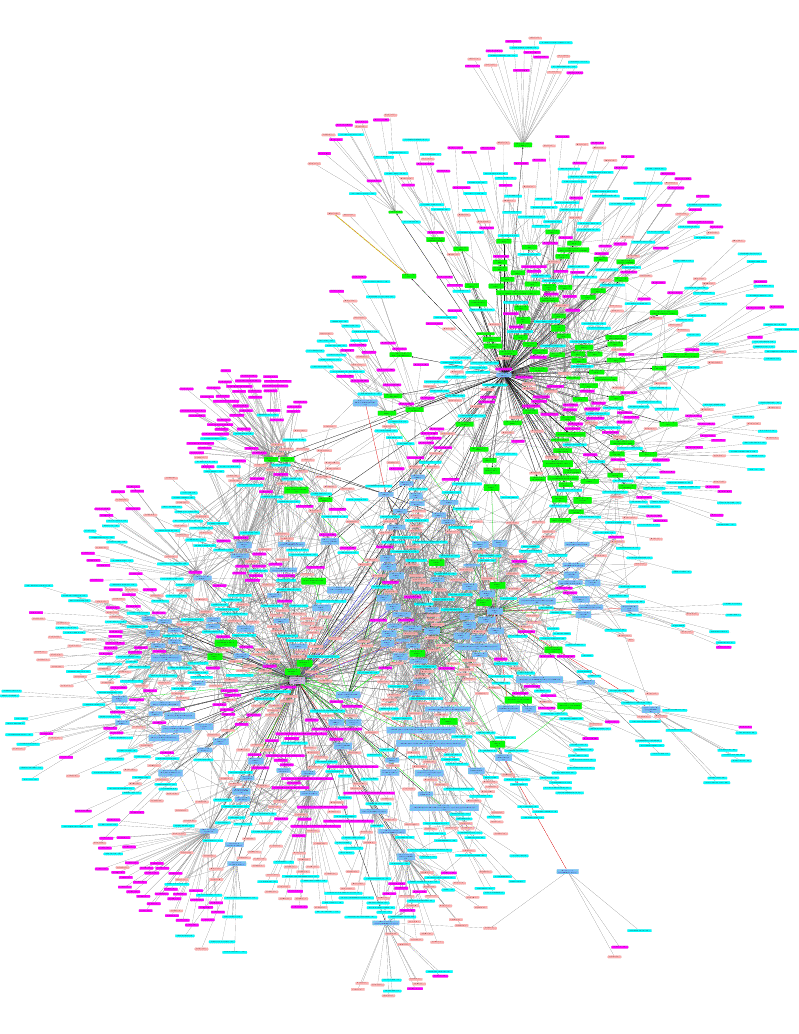