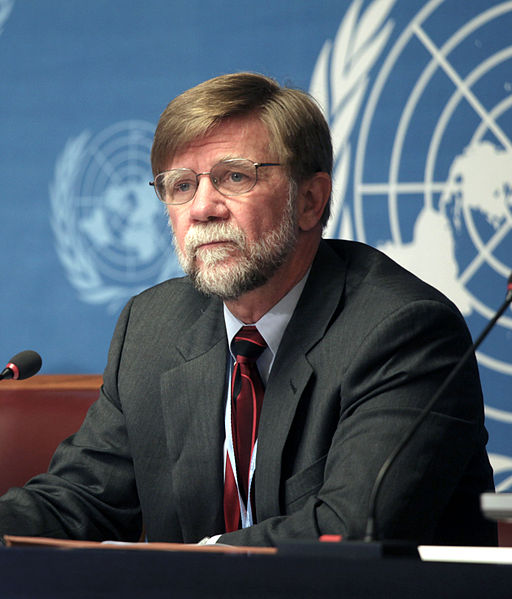 On May 23, 2012, the World Health Assembly began discussion of Agenda Item 13.14, the report of the Consultative Expert Working Group (CEWG) on Research and Development Financing and Coordination.

The US intervention was delivered by Dr. Nils Daulaire, Obama’s Director of the Office of Global Health Affairs for the United States Department of Health and Human Services (DHHS). The US statement was the most negative by governments on the R&D treaty, and was poorly received by public health NGOs.

The DHHS intervention for WHA Agenda item 13.14 came on the same day the USPTO delivered a blistering attack on compulsory licensing of patents at the 18th meetng of the World Intellectual Property Organization (WIPO) Standing Committee on the Law of Patents (SCP), on the agenda item for patents and health. (More here).

Among the key points made by Daulaire were the following

The United States is pleased at the level of attention devoted to this important topic We strongly agree that more financing from more sources is needed for developing country R&D needs.

We are also pleased that the CEWG report highlighted that the US is the only country already making the level of investment in R&D for neglected diseases of the poor called for in this report – over $1.5 billion a year. The U.S. public and private sectors are deeply committed to this effort, and I can speak for the public sector to say we are committed to maintaining and building on this investment.

We are equally determined to find ways to incentivize others – particularly middle-income countries – to contribute substantially more, and to approach the financing levels proposed for each country in this report. I would note that if the report’s recommendations were followed, the BRICS countries together would be called on to make an annual contribution of over $1.4 billion per year, nearly as much as the US currently contributes.

We recognize that market forces are not sufficient to bring adequate attention to this vital area, and that IP protections are unlikely to be a major contributor to progress in R&D for neglected diseases of the poor.

We believe it is critical to look at these recommendations in the context of the Global Strategy and Plan of Action on Public Health, Innovation and Intellectual Property. Nevertheless, we have serious concerns about a number of the CEWG recommendations.

At this time, We do not favor the establishment of an intergovernmental working group to further develop the CEWG proposals. The member states of WHO have not yet adequately clarified the aims of such a process.

We do not support the call for a binding instrument on financing by Member States, and we have heard from a large number of member states that they are not prepared to commit .01 percent of their gross domestic product, as called for as obligatory under such a binding instrument.

further, We cannot support any proposal that would put in place a new financing mechanism that could be characterized as a globally-collected tax

Oher commitments undertaken to support R&D in low and middle income countries would need to be time-bound, and thus subject to periodic review by funders and the global community as to the relative value of the efforts.

We do not support the proposal that would establish a single pooled financing mechanism – the history of innovation does not suggest that such a single central mechanism would be likely to provide the kinds of discoveries and products that the world needs.

We believe the most appropriate way forward is to identify incentives and efficiencies for R&D coordination and capacity building for developing country health concerns. This effort should draw upon the expertise in, and build capacity within, developing country research institutions themselves.

Because we do not believe sufficient consensus exists on fundamental elements of the CEWG recommendations, we believe the Director-General should be tasked with undertaking discussions with Member States, individually or regionally on the concepts in the experts’ report. We do not support launching a new InterGovernmentalWorkingGroup., The DG could be requested to report on the findings of these consultations to the EB in January 2013. this is the thrust of the draft resolution that has been submitted by Australia, Canada, Japan, Monaco and the US.

We also believe those member state discussions should include greater consideration of proposals passed over by the CEWG, such as advance marketing and procurement agreements, orphan drug legislation, regulatory harmonization and priority review vouchers. As these recommendations also must be seen in the context of the overall Strategy and Plan of Action, we would recommend that the original Expert Working Group recommendations, which are still on the table, be considered as well.

The goals of this consultation process should be to identify:

Areas of agreement or consensus among Member States;

Which proposals for R&D promotion enjoy the strongest support among Member States, and which do not;

Concepts in which action could begin on a voluntary basis among Member States (such as regional or targeted financing pools); and

Steps that countries could take at smaller scale, with the possibility of scaling them up through time-bound financial or programmatic commitments.

We have now had two rounds of expert consideration of this significant issue. These recommendations also come to this organization at a time of significant restructuring due to reform. Undertaking consultations in the way that we described will provide us time to better integrate our response with the reform underway at WHO, ensuring it receives the appropriate attention among many competing priorities.

On the basis of such consultations to identify areas of broad agreement or consensus, the Director-General should then report back on such areas of agreement, and seek the advice of Member States on potential ways forward, including on which proposals the Secretariat could further refine and develop. The Secretariat could also recommend a process for more formal Member State discussion, if warranted.