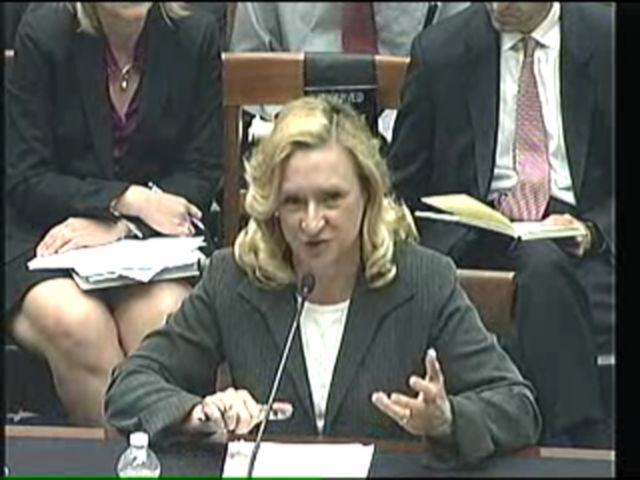 Here is a clip from the video of the hearing where the compulsory licensing case was discussed. Rea comes across as engaged, mentioning her background as a pharmacist, knowledge that the case had been appealed, and discussing her own direct talks with India government officials.

Under prodding, Rea suggested India may have broken WTO rules. Although both Rea and the Members of Congress seemed fairly uninformed or unwilling to discuss important aspects of the case, for example by never discussing the excessive pricing issues that were at the center of the public debate in India, there was a suggestion that both the Committee and USPTO were critical of one of the grounds for the compulsory license — the failure of Bayer to manufacture the product in India.

The ambiguity in the TRIPS is the tension between Article 27 of the TRIPS, and Article 5 of the Paris Convention, which itself is referenced in Article 2 of the TRIPS.

In Article 27 of the TRIPS, WTO members agree that “patents shall be available and patent rights enjoyable without discrimination as to the place of invention, the field of technology and whether products are imported or locally produced.”

On the other hand, Article 5(2) of the Paris Convention provides that “Each country of the Union shall have the right to take legislative measures providing for the grant of compulsory licenses to prevent the abuses which might result from the exercise of the exclusive rights conferred by the patent, for example, failure to work,” subject Article 5(4) which provides for a grace period (four years from patent filing or three years from the patent grant, whichever is last), before a compulsory license can be granted for insufficient working of a patent.

The legal issues are technical, and scholars carefully parse the language of various agreements. The question of what constitutes “discrimination” is not obvious, in a world where the WTO has adopted 2001 and 2003 agreements on TRIPS and public health, and many countries have special rules for medical inventions, including, for example, TRIPS plus measures (patent extensions and patent regulatory linkage), mandatory compulsory licensing for biomedical patents (EU Directive on Biotechnology, the biosimiliar pathway in the U.S. Affordable Care Act), the French and Belgium compulsory licenses for public health, the Canadian compulsory license of pharmaceuticals for export, and special research exceptions (the Bolar provions), to provide only a few examples.

Some of these issues were raised in a 2000-2001 case involving Brazil and the United States. On Janurary 9, 2001, a few days before leaving office, President Clinton requested the establishment of a panel at the WTO, to challenge Article 68 of Brazil’s 1996 industrial property law, which contained provsions regarding the local manufacturing of products. After Clinton left office, the Bush Administration withdrew the WTO case, as part of an agreement with Brazil that did nothing to settle the WTO jurisprudence on the issue. (See below). Since then, the US government has never brought a WTO case against any country that has a domestic working provision in its law, and the U.S. has also kept and added provisions to its own domestic laws that require patented inventions developed with federal research subsidies to be manfactured in the United States. A U.S. court even recently granted a compulsory license on a patent on a heart disease device, in order to prevent the manufacture of an infringing device from relocating manufacturing process in Mexico. (See: /node/1218).

As it stands now, the Obama Administration and the Congress appears to be referencing the local manufacturing issue in the Nexavar case to distract from the reasonably affordable pricing issue, in order to make it sound as through the issues were merely about who manufacturers the drug — rather than the pricing of a cancer drug far far higher than almost anyone in India can afford.

This then is yet another installment of the Obama Administration’s war on cancer patients living outside of the United States. Earlier installments include the White House opposition to a reference to the Doha Declaration on TRIPS and Public Health in the UN negotiations on non-communicable diseases, and the USTR efforts to limit public health safeguards in the TPPA negotiations to a limited set of diseases.

Below is the relevant text from the WTO Agreement on non-discrimination.

The United States of America and Brazil wish to notify the Dispute Settlement Body that they have reached a mutually satisfactory solution to the matter raised by the Government of the United States in WT/DS199/1 (Brazil – Measures Affecting Patent Protection), dated 8 June 2000.

Please find attached the text of the exchange of letters of 19 and 25 June 2001 on this subject. We would ask you to circulate this notification and attachment to the relevant Councils and Committees, as well as to the Dispute Settlement Body.

2. Nevertheless, in the spirit of the proposal made by Ambassador Robert Zoellick to Minister Celso Lafer in their recent meeting in Geneva for a common endeavor to find a mutually satisfactory solution for the dispute, and following up on our recent conversation about the same subject in Washington D.C., on May 24, I would like to convey to you the following proposal.

3. Should the U.S. withdraw the WTO panel against Brazil concerning the interpretation of Article 68, the Brazilian Government would agree, in the event it deems necessary to apply Article 68 to grant compulsory license on patents held by the U.S. companies, to hold prior talks on the matter with the U.S. Government. These talks would be held within the scope of the U.S. – Brazil Consultative Mechanism, in a special session scheduled to discuss the subject.

4. I look forward to receiving your response to this proposal.

Thank you for your letter, which referred to the panel initiated by the United States regarding the consistency of Article 68 of Brazil’s Industrial Property Law (Law 9.279/96) with the TRIPS Agreement.

As Ambassador Zoellick mentioned during his meeting with Minister Celso Lafer, we are interested in finding a mutually satisfactory solution to this dispute. Your letter conveyed a proposal that should lead to such a solution. I am pleased to report that my government will agree to terminate the WTO panel proceeding without prejudice concerning the interpretation of Article 68, based on your government’s commitment to hold prior talks with the United States with sufficient advance notice to permit constructive discussions in the context of a special session of the US – Brazil Consultative Mechanism, should Brazil deem it necessary to apply Article 68 to grant a compulsory license on patents held by U.S. companies. While we had real concerns regarding the potential use of Article 68 of Brazil’s Industrial Property Law, we note that this provision has never been used to grant a compulsory license. In addition, we would expect Brazil not to proceed with further dispute settlement action regarding sections 204 and 209 of the U.S. patent law.

As Ambassador Zoellick noted during his meeting with Minister Lafer, the United States’ concerns were never directed at your government’s bold and effective program to combat HIV/AIDS. Our ability to find a mutually satisfactory solution to this WTO dispute will allow our conversation regarding this scourge to turn to our shared goal of defeating the HIV/AIDS virus.

We will make the necessary arrangements to notify the WTO Secretariat of our decision as soon as possible.
__________