The records, which we received through FOIA, are available here:

On September 15, 2016, Republican leadership on the House Committee on Energy and Commerce requested that the Department of Health and Human Services (HHS) Inspector General initiate an investigation into the handling of funding decisions at the NIH, including coordination between the FNIH, NIH, and NFL.

That letter follows a May 2016 report by the Democratic Committee staff, which provides an outline of the interactions between the NFL, FNIH, and NIH.

KEI briefly reviewed the records and found concerning evidence that the NFL exerted undue influence on the deliberations of NIH officials in the grant process related to concussion research, an area in which it has a vested interest.

Emails document conversations between Dr. Walter Koroshetz, then Acting Director of the National Institute of Neurological Disorders and Stroke (NINDS), and various representatives of the FNIH and NFL, including most importantly Dr. Betsy Nabel, the Chief Medical Officer for the NFL, and Dr. Maria Freire, the FNIH Executive Director.

On June 17, 2015, Dr. Freire informed Dr. Koroshetz of concerns about NIH funding from various doctors with connections to the NFL, including Dr. Nabel.

Dr. Koroshetz spoke on the phone with Dr. Nabel that same day, in which they discussed NFL funding of concussion research and potential proposals for use of NFL funding.

The next day, Dr. Koroshetz informed Dr. Nabel that he had heard from the FNIH that the “NFL [is] questioning NIH funding decision of the longitudinal study and asking FNIH to slow down the process.” The “longitudinal study” received NIH funding in December 2015, and is being led by Dr. Robert Stern at Boston University. The NFL balked at funding the concussion studies primarily because of Dr. Stern, who had previously publicly criticized the NFL over their handling of concussion cases.

In response, the NFL questioned the NIH peer review process — asserting a conflict of interest between Dr. Stern and panel members — and questioned Dr. Stern’s “ability to be unbiased and collaborative.” (For more reporting on these emails, see Deadspin’s coverage of the Energy and Commerce report.)

Dr. Koroshetz also reminded Dr. Nabel that it would be illegal for him to talk about a specific grant prior to the public announcement of the grant award, and that third parties could not be allowed to influence NIH funding decisions: 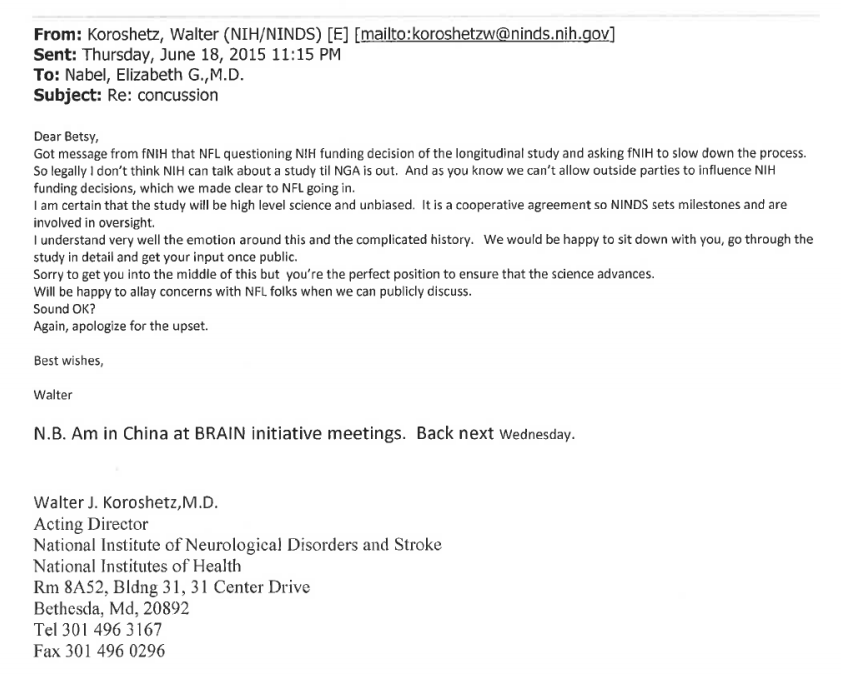 “Obviously my goal is to make sure the science goes forward,” Dr. Nabel responded, while maintaining that she was “taking a neutral stance here.” (For the entire email chain, see pages 468-471 of part 2 of the documents.)

In a follow-up email with Maria Freire, Dr. Koroshetz emphasized the integrity of the NIH grant review process, and mentioned that “NIH is going to fund it with or without NFL support.” He also floated a potential “compromise,” to expand the study “so that the Boston site which the NFL fears doesn’t dominate.” (For more, see pages 462-467 of part 2 of the documents.)

Concerns about whether the NIH would choose to fund the study continued throughout the summer, reaching well into the fall, before NINDS announced in December that it would go it alone and commit $16 million of its own budget to fund the studies.

In a November 17, 2015 email, Freire recounted a conference call with NIH and FNIH staff, as well as Jeff Miller, a high-level NFL official, regarding potential NFL funding of NINDS studies. In that email, Freire asked Dr. Koroshetz to send along the “completed research plan” so that she could pass it on to the NFL “for their consideration.” 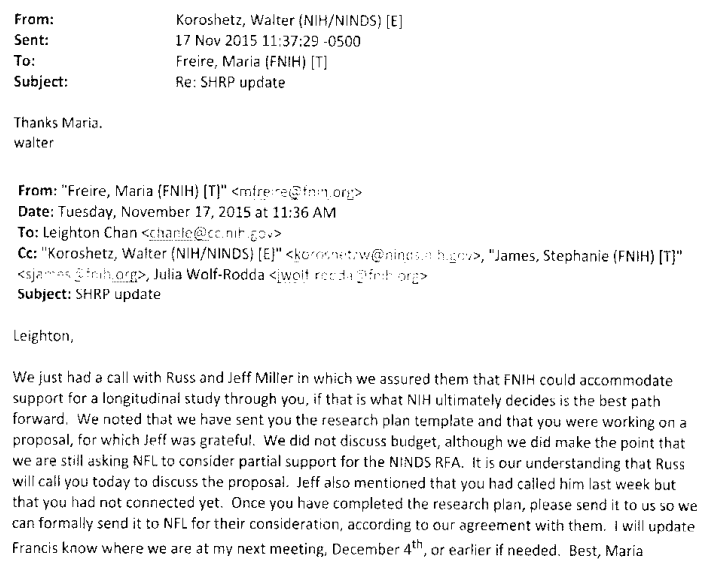 These emails are concerning, because they reveal the extent to which private profit-making organizations are involved in guiding and financing public health research that could affect their bottom lines.