Santiago, Chile — Members of the Chilean Congress and a group of 6 patients visited the Chilean Ministry of Health yesterday to ask that the government use its authority under Chilean law to end patent monopolies on the prostate cancer drug enzalutamide (U.S. brand name Xtandi) and on sofosbuvir-based combination drugs for the treatment of hepatitis C virus (HCV).

The patients and members submitted a petition that outlined the legal authority and public policy rationale for the grant of compulsory licenses on the patents for the drugs described in the petition. Those compulsory licenses would allow prescription drug manufacturers to produce affordable generic versions of the drugs, subject to a reasonable royalty.

The petition was written by Chilean attorney Luis Villarroel, and signed by Luis and five members of civil society and patient groups, and four members of the Chilean Congress, including Diputados Giorgio Jackson, Karla Rubilar, Miguel Alvarado, and Gabriel Boric.

Knowledge Ecology International was asked to provide technical advice on the petition.

According to a blog post by Innovarte Corporation, an intellectual property group that worked on the petition, the group of patients and members met with Claudio Castillo, the Chief of Staff for the Ministry of Health, who promised a response to the petition within two weeks.

The petition argued that the government should use compulsory licenses to lower the high prices of enzalutamide and HCV drugs, and ensure affordable access within the constraints of the government’s health care budget. 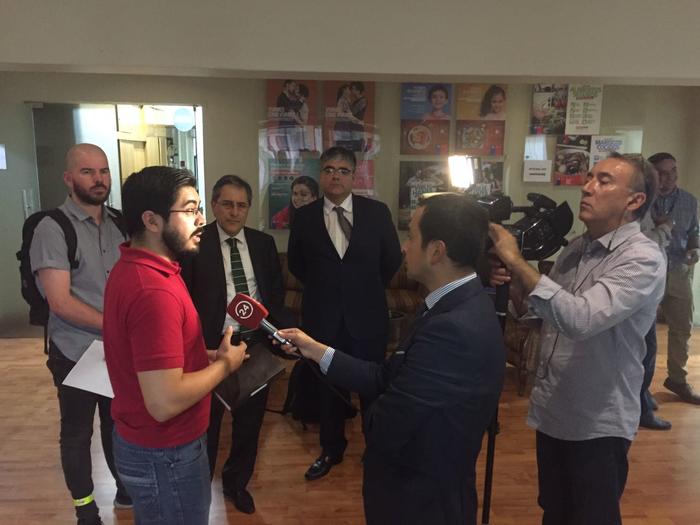 Patients and members of Congress deliver their letter to the Chilean Ministry of Health. | Courtesy of Luis Villarroel.

Sofosbuvir can end up costing up to $36,000 per patient in Chile, depending upon the length of treatment. Astellas Pharma, a Japanese drug company that sells enzalutamide worldwide, charges a price of approximately $45,000 per patient per year in Chile for Xtandi — three times the average income of $14,100 (2015 GNI per capita, Atlas method, current US$, World Bank World Development Indicators).

The petition noted that the government should address high prices — and the consequent high drug spending through government programs — using compulsory licenses, rather than rationing treatment. According to an unofficial translation by KEI, the letter noted that “The substantial reduction in the price of such medicines … through the use of compulsory licenses permits the adequate management of resources for the protection of health on the part of the State, increasing or improving coverage by saving billions of pesos that can be re-allocated to other health needs and most importantly recovering the health of thousands of Chileans.”

Patients and members of Congress have requested that the Ministry of Health declare it a public health need to improve access to sofosbuvir-based HCV drugs and the prostate cancer drug enzalutamide. This would save the lives of the thousands of Chileans who cannot afford the excessive prices. We hope that the government will take steps to issue compulsory licenses on the drugs in our petition and incorporate compulsory licensing in its public policy toolbox.

Today we petitioned the Ministry of Health to declare these diseases as urgent, and thus we begin to work together to obtain the compulsory licenses. We do not want more ‘bingo in the barrios’ to solve a problem as important as health. We need to know if the government is or is not willing to issue compulsory licenses and we do not want to waste time, because that time is a luxury that patients can not afford.

Miguel Alvarado, Member of the Chilean House of Representatives, said:

We believe that with today’s action, we will finally begin to give more protection to suffering patients. Patients with cancer, or with hepatitis C, see that there are medicines available but do not have the resources to pay for them. Or if they do, the price puts their families under great stress. In this context, it is a great opportunity that the Ministry of Health has received us and has set a working agenda to fix the situation in our country with regard to high cost drugs.

Legislators and cancer patients in Chile are insisting that safeguards in the patent laws are actually used to protect the public.

The petition mentioned the following drugs, but asked that the Chilean government issue compulsory licenses on any other sofosbuvir combination drugs for the treatment of HCV: