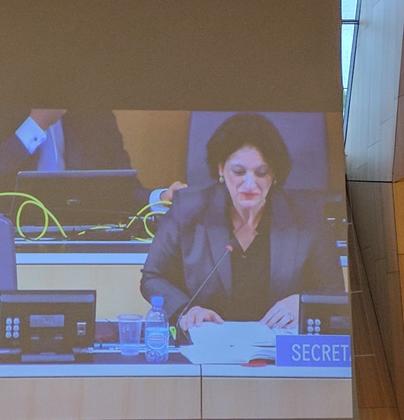 Thank you Mr. Chair and good morning, everyone. I will indeed try to take the committee into the main changes and highlights of this new text. I’m not sure it will be a swinging presentation, Mr. Chair, but I will try to do my best.

Since developments have taken place, since the 33rd session of the SCCR, indeed the committee requested that revised version of the consolidated text on definitions, objective protections and rights to be granted be prepared. So this new text is now before you, in document SCCR/34/3. It was prepared with a new presentation and including additional explanations to facilitate the decision making process by the committee.

You will also remember that the first three issues, meaning the definitions, the object of protection and the rights to be granted have been extensively discussed by this committee, essentially on the basis of the informal charts which had been prepared by the outgoing Chair.

Now, in order to come into the definition, to the core of the text, sorry, I also want to highlight that — some highlights of the new structure on the provision. The first part on definitions, you notice that the order of definition has been changed, and some of the definitions have also been polished.

It is to be noted that some of the provisions included in the whole text are either between brackets, either in italics or in side box and this marking indicates that the committee has not achieved consensus about these provisions.

Also you note that the presentation has been modified with some notes at the beginning of the document, in order to facilitate the committee’s understanding.

Alternative B is a more technology neutral definition of broadcasting, and while this alternative received significant support at the last session of the committee, we can also notice that the reference to wire transmissions is still in italics as one delegation has indicated some concerns as regards this provision. So the inclusion of wire transmissions is pending the result of the internal consultations in that Member States.

You will also notice that in this definition, there is another unresolved issue which is indicated in italics and which refers to the endities that deliver the signals exclusively by means of computer networks, which the committee didn’t wish to include in the scope of protection. Here the brackets in relation to the facts that transmission of a computer networks are not considered broadcastings have been removed, compared to the previous version of the — of the text.

However, further work, of course, is required from the committee to clarify that broadcasting and possibly cablecasting organizations that provide services over the digital transmissions would be protected while other entities, in other words nonlinear services, such as pure video on demand services, not related to traditional broadcasting would not be protected.

In relation to the definition of retransmission, it has also been further polished in this new text as the committee was — it was possible to remove one of the alternatives which was deleted. First of all, I want to say that the retransmission — the text now refers to retransmission by any means of a program carrying signal broadcast. The word “broadcast” was added compared to the previous version, and there was also the word acting on its behalf, which was included compared to the previous version.

As you can see, however, this definition is still in italics and will require further input from this committee. In particular, in relation to the clarification of the scope of online broadcast-related services which were discussed last time, such as in particular simulcasting and catch up TV services. The committee expressed last time some desire to protect such services, while also stressing the need to refind the definition of the third to exclude the generating the pure video on demand services as such.

In paragraph 2, you will also note that the word “deferred” is still in brackets as well as the making available rights. And as I mentioned, before the committee is still discussing the inclusion and wording of these elements, which appear in different parts of the text.

Coming now to paragraph 2, subparagraphs Roman I and Roman II, they also need to be further considered by committee and they appear in italics and brackets. Subparagraph 1 provides a text which would allow Member States to limit the protection of deferred transmissions as provided in subparagraph 1.

Subparagraph 2 would be — is applicable only in case of paragraph 1 remains and it provides a possibility for Contracting Party to limit national treatment and to apply material reciprocity in the case of deferred transmissions.

If you want to understand the rationale of this paragraph, it relies on the fact that if the committee decides not to include deferred transmissions in the object of a protection, in the text, then subparagraph Roman I and Roman II would not be needed and they should be deleted. So this issue is still under consideration by the — by the committee as such.

Now coming to part three, relation to the rights to be granted, you will also note that some text has been also streamlined there. First of all, I want to stress that the legal protection is provided under an exclusive right of authorizing as already provided also under the Beijing Treaty. The expression by any means also at the end of this subparagraph 1 appears in italics as it requires also a decision from the committee.

The text of paragraph 1, ii has been harmonized with the wording of subparagraph 1 by referring to retransmission and program carrying signal, and I also want to refer to the last paragraph, paragraph 2, which still remains as well in italics and relates to the possible inclusion of prebroadcast signals and the rights to be granted, and the protection which is provided and the rights to be granted is now in the form of a right to prohibit being authorized with transmission by broadcasting organizations of their own prebroadcast signal by any means.

These provisions are act dressed for first time on the basis of this consolidated text and the drafting has been based namely on existing documents, such as SCCR/27/2 rev and also the provisions closely follow recently adopted provisions in international treaties such as the WIPO performances treaty and the Beijing Treaty. Noting also that in is some cases it was necessary to adapt or take into consideration the broadcasting and the cablecasting environment and this is in particular the case for the provision relating to technological protection measures and rights management information.

So I think this is in a nut shell, Mr. Chair the presentation of the new document.