On October 17, 2017, KEI sent a letter to the NIH regarding the failure of the University of Pennsylvania to disclose federal funding of five patented inventions for CAR T.

Today (October 18, 2017), we received this statement from the University:

“We have reviewed the letter and have confirmed that each of these patents was reported to the government as having NIH funding.

UPenn also filed a correction to the patent disclosure with the USPTO. The USPTO includes this correction, but not on the version that is text searchable.

A “certificate of correction” is attached to each patent filing, but as an image file. 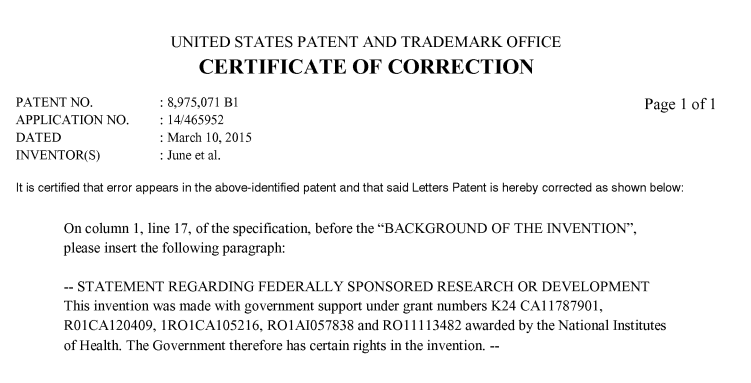 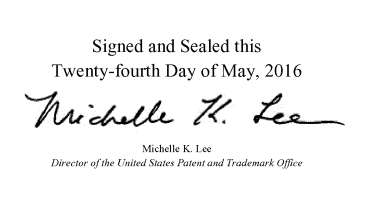 KEI will be asking UPenn if there are other patents where such a correction has been issued, and asking the USPTO to find a way to note such corrections in the full text database of patents, which is the public’s primary means of checking for federal funding disclosures.

KEI will also ask the NIH to publish a list of patented inventions that have received federal funding, based upon the disclosures made to the NIH for use in the Edison system.

KEI is continuing to review the disparities between what is disclosed on the patents and the actual federal funding received. Earlier we asked HHS to review the failure of Cold Spring Harbor to disclose federal funding in two patents related to the expensive drug Spinraza, and, more recently, we have been reviewing the lack of disclosure in patents on Kadcyla and several patents granted to the Memorial Sloan Kettering Cancer Center. In the Cold Spring Harbor case, there is a correction disclosing federal funding in one of the two patents in the Orange Book.

This disclosure of the federal funding and rights in these patents is important, and needs to be done in a way that works for the public.

The take home messages are (1) we have to routinely check the patent images to see if there are corrections to the patents, (2) we have been under estimating the number of patents with Bayh-Dole rights, because we had relied on the USPTO’s text searchable versions of the patents, which does not include or even note the corrections, and (3) there are areas where the NIH and the USPTO can improve the reporting of the public’s rights in medical patents.

We had earlier filed a letter with the NIH on 2 Cold Spring Harbor patents on nusinersen (Trade name Spinraza), which did not have government funding reported in the text version of the patents published by the USPTO. We checked today, and one of the two patents had a certificate of correction, disclosing the federal funding. The second patent did not.

However, in the Cold Spring Harbor case, the certificates of correction for patent 8,361,977 was made on April 24 and 25, 2017 (Copy of the April 25th correction here). KEI’s letter to the NIH on the failure to disclose was dated January 18, 2017, so the correction was made more than 3 months after the KEI letter to HHS, and several years after the patent was initially filed (2005), and more than four years after the patent was granted (2013). The federal law gives a company “a reasonable time” to disclose federal funding.

Cold Spring Harbor has yet to provide a correction to the 8,980,853 patent.

We are looking at other cases where we believe there has been under reporting on Bayh-Dole rights in patents, which we will share shortly.