Cold Spring Harbor Laboratory (CSHL) is a private, nonprofit institution, focusing today on cancer, neuroscience, plant genetics, genomics, and quantitative biology. Tracing its history to the founding of a lab in 1890, the storied history of the institution includes a role promoting eugenics and limitations on immigration a century ago. In more recent years, CSHL has been an important center for medical research, employing 600 researchers, and has employed eight scientists who have been awarded the Nobel Prize in Physiology or Medicine, including James Watson, who directed the institution and later served as President and then chancellor until 2007.

In January 2017, KEI asked the Department of Health and Human Services to investigate a failure to disclose federal government funding for two patents listed in the FDA Orange Book for the drug nusinersen, marked by BioGen under the tradename Spinraza for the treatment of spinal muscular atrophy, a rare and often fatal neuromuscular disorder. (More here)

The initial price of Spinraza was $125,000 per injection, and had cost of $750,000 for the first year of treatment, and $375,000 for maintenance doses. The FDA Orange Book listed four patents. Two of the patents were assigned to the University of Massachusetts, and declared federal funding on the patent. Two patents were assigned to CSHL and Isis Pharmaceuticals (now known as Ionis Pharmaceuticals), and neither one had disclosed federal funding.

Following the KEI complaint to HHS, CSHL filed an amendment to the patent application, and received a “certificate of correction” for patent 8,361,977, disclosing NIH grants GM42699 and NS041621, and government rights in the invention. No such amendment has been issued for the second patent, 8,980,853, even though the patents share two inventors and the same subject matter.

The NIH has been handling the investigation into the failure to disclose, and it appears to have led to a larger review. KEI has identified seven different CSHL patents that were granted certificates of correction on federal funding since the KEI letter was sent in January of 2017.

The NIH identifies 13 patents granted to CSHL since 2012 that the NIH itself says benefited from NIH funding. Of these 13 patents, CSHL had originally disclosed federal funding on 6 patents.

From May to August of this year, CSHL was issued certificates of correction that provided disclosures of federal funding for 7 additional patents.

Table: The 13 patents the NIH reports associated with grants to Cold Spring Harbor Labatory, since 2012 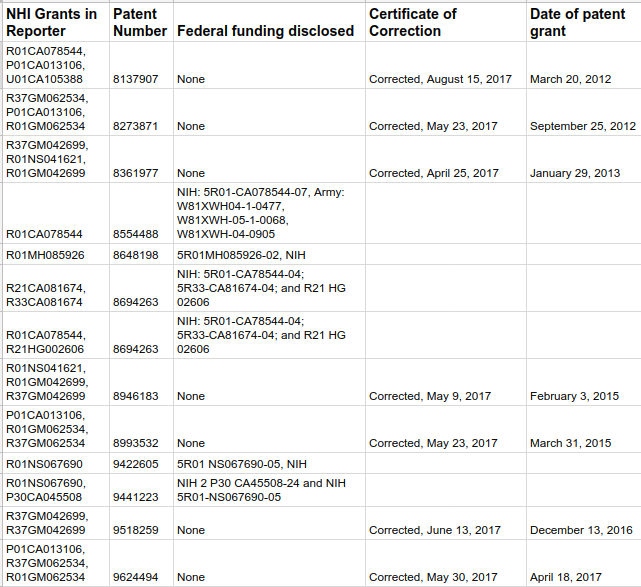 Since 2012, CSHL has failed to disclose federal funding (at least) more than half the time such funding existed.

Going back further, since 1991, CSHL has failed to disclose federal funding on 15 of 56 patents issued that the NIH lists has having benefited from federal funding. Of these 15, CSHL has now received certificates of correction from the USPTO on the topic of federal funding for 11 patents.

“An obligation on the part of the contractor, in the event a United States patent application is filed by or on its behalf or by any assignee of the contractor, to include within the specification of such application and any patent issuing thereon, a statement specifying that the invention was made with Government support and that the Government has certain rights in the invention.”

The 56 patents referred to above represent only the patents reported through the NIH iEdison system.

A separate query in the USPTO system found a total of 156 patents granted to Cold Spring Harbor Labs, of which 62 did not report federal funding in the initial filing. At least 11 of the 62 were later corrected. CSHL receives funding from non-federal sources, so some of the non-disclosures are accurate and appropriate.

The disclosure of government rights to the public, at the time of filing the patent is important for the protection of the public interest in publicly financed research and development. When the federal government has rights in a patent, there are opportunities for it to require less restrictive licensing terms, and an obligation to make the invention “available to the public on reasonable terms.”

KEI will be working with the NIH to enhance the reporting of government rights in patented inventions.

This was the Certificate of Correction for the 977 patent: 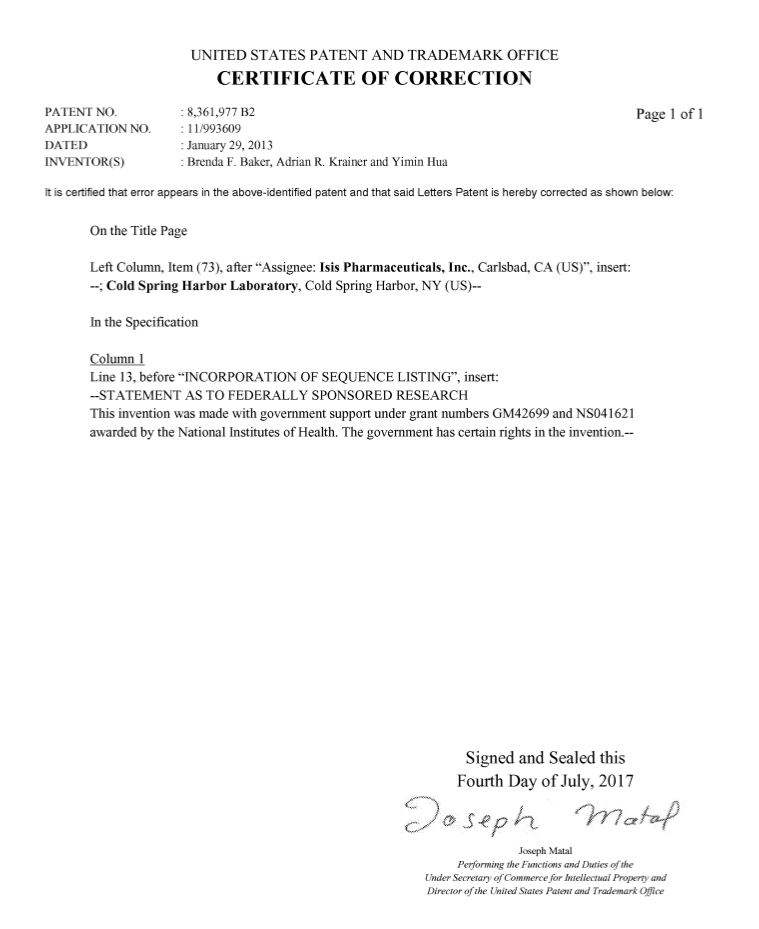