On April 29, 2020, the United States Trade Representative (USTR) published its annual Special 301 Report. A PDF copy of the report is available here. KEI has compiled copies of the Special 301 Report for every year since its inception in 1989, and additional data, in this page.

Aside from Kuwait, which was moved to the Watch List, the countries cited in the Priority Watch List remained unchanged in relation to 2019. Costa Rica, Greece, Jamaica and Switzerland were removed from the Watch List. Trinidad and Tobago was placed in the Watch List.

Remarkably, the terms “coronavirus,” “COVID-19,” “SARS-Cov-2,” “pandemic,” or “emergency” are never mentioned in the 2020 edition of a report dedicated in part to access to health technologies worldwide. This year the Special 301 Subcommittee held its public hearing on February 26, 2020. Some of the organizations that testified, including Public Citizen and KEI, raised issues related to COVID-19 during the hearing and in post-hearing comments.

As in previous years, the USTR complains about countries that are using or promoting the use of flexibilities allowed under international intellectual property norms. This year the report cites “actions by trading partners to unfairly issue, threaten to issue, or encourage others to issue compulsory licenses,” and highlights Chile, Colombia, Egypt, El Salvador, India, Indonesia, Malaysia, Russia, Turkey, and Ukraine. This language is nearly a verbatim copy of a similar paragraph in the 2019 report, although it adds Egypt to the list.

For example, actions by trading partners to unfairly issue, threaten to issue, or encourage others to issue compulsory licenses raise serious concerns. Such actions can undermine a patent holder’s IP, reduce incentives to invest in research and development for new treatments and cures, unfairly shift the burden for funding such research and development to American patients and those in other markets that properly respect IP, and discourage the introduction of important new medicines into affected markets. To maintain the integrity and predictability of IP systems, governments should use compulsory licenses only in extremely limited circumstances and after making every effort to obtain authorization from the patent owner on reasonable commercial terms and conditions. Such licenses should not be used as a tool to implement industrial policy, including providing advantages to domestic companies, or as undue leverage in pricing negotiations between governments and right holders. It is also critical that foreign governments ensure transparency and due process in any actions related to compulsory licenses. The United States will continue to monitor developments and to engage, as appropriate, with trading partners, including Chile, Colombia, Egypt, El Salvador, India, Indonesia, Malaysia, Russia, Turkey, and Ukraine.

In the middle of a pandemic, complaining about compulsory licensing is a tone-deaf statement at best. In stark contrast to USTR, the Secretariat of the World Trade Organization (WTO) has recently mentioned in their website that compulsory licensing, as well as voluntary licensing, are among the policy tools that countries can use to ensure that drugs and other health technologies are available and affordable to their citizens. There are several legitimate grounds that justify the use of compulsory licenses over patented inventions, especially right now. The United States should be among the countries considering these measures instead of bullying others for doing so.

Countries currently have obvious and legitimate reasons to be concerned about local manufacturing of technologies related to COVID-19. The USTR has long criticized countries that have local manufacturing requirements in their patent legislation, especially in the context of compulsory licenses, but this year complaining about this is particularly unwise.

Regardless, the 2020 Special 301 Report mentions local manufacturing or technology transfer a few times. For example, Indonesia is cited in the Priority Watch List. One of the issues raised in the report are the “market access barriers” in Indonesia, which include “requirements for domestic manufacturing and technology transfer for pharmaceuticals and other sectors.”

U.S. right holders continue to face challenges in Indonesia with respect to adequate and effective intellectual property (IP) protection and enforcement, as well as fair and equitable market access. Concerns include widespread piracy and counterfeiting and, in particular, the lack of enforcement against dangerous counterfeit products. To address these issues, Indonesia would need to develop and fully fund a robust and coordinated IP enforcement effort that includes deterrent-level penalties for IP infringement in physical markets and online. Indonesia’s 2016 Patent Law continues to raise concerns, including with respect to the patentability criteria for incremental innovations, the grounds and procedures for issuing compulsory licenses, and the disclosure requirements for inventions related to traditional knowledge and genetic resources. Indonesia’s law concerning geographical indications (GIs) raises questions about the effect of new GI registrations on pre-existing trademark rights and the ability to use common food names. Indonesia also lacks an effective system for protecting against the unfair commercial use, as well as unauthorized disclosure, of undisclosed test or other data generated to obtain marketing approval for pharmaceutical and agricultural chemical products. Online piracy is a concern, particularly through piracy devices and applications, and illegal camcording and unlicensed use of software remain problematic. In addition, the United States remains concerned about a range of market access barriers in Indonesia, including certain measures related to motion pictures and requirements for domestic manufacturing and technology transfer for pharmaceuticals and other sectors.

In previous years the Special 301 Report has included a section about “intellectual property and health,” generally stating that comments filed during the review process “highlighted concerns arising at the intersection of IP policy and health policy.” This section remains in the report this year, but without a reference to WIPO or the WHO that was included in previous reports.

The U.S. Government works to ensure that the provisions of its bilateral and regional trade agreements, as well as U.S. engagement in international organizations, including the United Nations and related institutions, such as WIPO and the World Health Organization, are consistent with U.S. policies concerning IP and health policy and do not impede its trading partners from taking measures necessary to protect public health. Accordingly, the Office of the U.S. Trade Representative will continue its close cooperation with relevant agencies to ensure that public health challenges are addressed and IP protection and enforcement are supported as one of various mechanisms to promote research and innovation.

The U.S. Government works to ensure that the provisions of its bilateral and regional trade agreements, as well as U.S. engagement in international organizations, are consistent with U.S. policies concerning IP and health policy and do not impede its trading partners from taking measures necessary to protect public health. Accordingly, USTR will continue its close cooperation with relevant agencies to ensure that public health challenges are addressed and IP protection and enforcement are supported as one of various mechanisms to promote research and innovation.

Although the Special 301 Report is supposed to be about intellectual property, the USTR also targets pricing and reimbursement of health technologies. This year the term “reimbursement” appears 16 times in the report. The USTR argues that in some foreign markets pricing and reimbursement systems “are not market-based” or do not “appropriately recognize the value of innovative medicines and medical devices.” What the USTR refers to when it says that these reimbursement systems do not “appropriately recognize the value” of these products is that foreign markets should be accepting higher prices. Some of the countries criticized in the 2020 report for their reimbursement programs are Japan, Korea, New Zealand, and Turkey.

The United States has long urged Japan to implement predictable and stable pricing and reimbursement policies that reward innovation and provide incentives for companies to invest in the research and development of advanced medical devices and innovative pharmaceuticals. Reforms to Japan’s reimbursement system since 2017 represent a retreat from previous progress made in this area. The United States has serious concerns regarding recent policy changes to the Price Maintenance Premium (PMP), a mechanism designed to accelerate the introduction of innovative drugs to the Japanese market. Several factors taken into consideration in PMP calculations, such as the number of local clinical trials and product launches, appear to make it easier for Japanese companies to qualify for the premium. Reimbursement outcomes under the PMP system suggest that U.S. companies, especially small-and medium-sized enterprises, are at a disadvantage compared to Japanese companies. The PMP revisions may also introduce significant uncertainty into pricing for patented pharmaceuticals, undermining investment planning for capital-intensive drug discovery research and clinical trials. The implementation of the Cost-Effectiveness Assessment, a health technology assessment system, may add uncertainty for companies selling highly innovative and high-impact drugs and medical devices in Japan. Any assessment of healthcare spending should fairly evaluate all areas contributing to costs in the long term, rather than targeting a particular sector. These concerns will remain a priority for the United States, and the United States will continue to closely monitor the situation as it develops.

The United States has urged Korea to seriously consider stakeholders’ concerns and ensure that pharmaceutical reimbursement is conducted in a fair, transparent, and nondiscriminatory manner that recognizes the value of innovation. In March 2018, negotiations to improve and better implement the KORUS FTA concluded with a commitment from Korea to amend its Premium Pricing Policy for Global Innovative New Drugs to ensure non-discriminatory and fair treatment for pharmaceutical products and medical devices, including imported products and devices. Korea’s implementation of this commitment has resulted in amendments that appear to make it so that very few, if any, companies or products will qualify for premium pricing. It is critical that Korea implement this commitment fully and in good faith, while also addressing continuing U.S. concerns regarding the lack of transparency and predictability and the need to appropriately recognize the value of innovative pharmaceuticals and medical devices in Korea’s pricing and reimbursement policies and their underlying methodology.

There are long-standing concerns about the policies and operation of New Zealand’s Pharmaceutical Management Agency (PHARMAC), including, among other things, the lack of transparency, fairness, and predictability of the PHARMAC pricing and reimbursement regime, as well as negative aspects of the overall climate for innovative medicines in New Zealand.

Stakeholders continue to raise concerns regarding Turkey’s pharmaceutical manufacturing inspection process. The United States urges Turkey to build upon its recent accession to the Pharmaceutical Inspection Convention and Cooperation Scheme (PIC/S) and to recognize Good Manufacturing Practices certificates issued by any of the PIC/S members to improve regulatory timelines. Additionally, ongoing reimbursement issues continue to act as market access barriers.

This year, USTR announced an out-of-cycle review of Saudi Arabia to consider the “protection against unfair commercial use, as well as the unauthorized disclosure, of undisclosed test or other data generated to obtain marketing approval for pharmaceutical products.”

In 2019, Malaysia was subject to an out-of-cycle review to consider whether the country was providing “adequate and effective IP protection and enforcement, including with respect to patents.” This year the USTR announced that it will extend that out-of-cycle review and “will press Malaysia to complete actions to fully resolve these concerns in the near term.”

How consistent is US trade policy on intellectual property rights? Compare the USTR Special 301 lists for 2016, by the Obama Administration, and for 2020, by the Trump Administration. 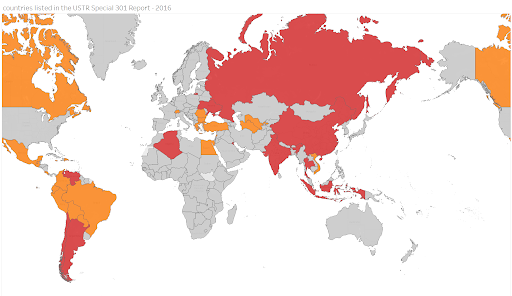