These comments concern trade disputes involving patents and other intellectual property for medical inventions, including pharmaceutical and biologic drugs.

I am the Director of Knowledge Ecology International (KEI), a non-profit organization that focuses on the management and governance of knowledge resources. A significant amount of KEI’s focus is on trade policy as it relates to both innovation and access to knowledge goods, including medical technologies.

Including my work before KEI was created at the Center for the Study of Responsive Law’s Consumer Project on Technology (CPTech), I have worked on the impact of intellectual property rights on consumers for more than twenty years. Since 1994, I have followed international trade negotiations on global standards for intellectual property protection and the implementation of those standards by governments.

During the hearing on March 13, 2013, the Subcommittee heard from Roy Waldron, the Chief Intellectual Property Counsel for Pfizer. Dr. Waldron’s written and oral testimony included a variety of complaints about India’s patent law/1/ and made some misleading or completely wrong statements about India’s global obligations under WTO rules for intellectual property. In this respect, the comments by Arvind Subramanian from the Peterson Institute for International Economics were relevant and worth considering. Subramanian noted that government officials in India see their actions as consistent with their international obligations. Subramanian also stated that if the United States government believes India is operating outside of the rules, it should file a complaint under the WTO dispute resolution understanding (DSU) system.

Publicly, Pfizer, other big drug companies, and the United States trade negotiators are constantly asserting that India and some other countries are operating outside of their TRIPS obligations on issues such as the scope for granting patents, the grounds for compulsory licensing, or the protection of pharmaceutical test data. But the USTR has not used the WTO to resolve these disputes, and the reason is that the USTR expects it would lose the cases. Instead, the drug companies are pushing the Congress and USTR to mount more political efforts to change policies in India and elsewhere.

To be clear, what Pfizer wants is not a “rules based” trading system, but rather outcomes that reflect the economic and political power of the U.S. government to demand tough intellectual property right standards and practices, and ultimately higher prices for drugs in India.

Pfizer wants the U.S. government to give other trade and political concessions to India, in return for those high prices. This has nothing to do with the WTO’s TRIPS requirements.

There are two reasons why the Congress should reject the lobbying by Pfizer and other companies on this issue.

1. The first and most compelling reason is that prices for new drugs and other medical technologies create hardships and lead to unacceptable and even appalling disparities in access to products.

2. The second reason, touched on by other witnesses at the March 13, 2013 hearing, is that the United States will have to give up a lot to get India to take steps that exclude its own residents from access to new medicines, and in a world of finite political and economic assets and leverage, excessive attention to Pfizer’s agenda will inevitably harm other domestic economic interests in the United States, for example, the energy, agricultural, information and services sectors.

Since my first visit to India in 1996, I have closely followed changes in the India patent law and the Indian pharmaceutical industry.

In February 2001 I negotiated a deal between CIPLA, an India manufacturer of generic drugs, and MSF, the medical humanitarian organization, for a $350 per year three drug combination therapy to treat HIV/AIDS, a sharp reduction from the more than $10 thousand cost of the same cocktail from patent holders in South Africa at the time. The CIPLA offer dramatically changed the global debate on access to HIV/AIDS drugs in the developing world, and from 2002 to 2011, the numbers of persons receiving antiretroviral drugs in Africa increased from a few thousand to more than 6 million persons. Among all low and middle income countries, access to ARV drugs increased from a few hundred thousand to more than eight million, during this same period (See Figure 1). The expanded access was only possible because in 2001, India was already producing generic HIV/AIDS medicines to supply the Brazil market, and because first generation AIDS drugs were off-patent in both India and Brazil. 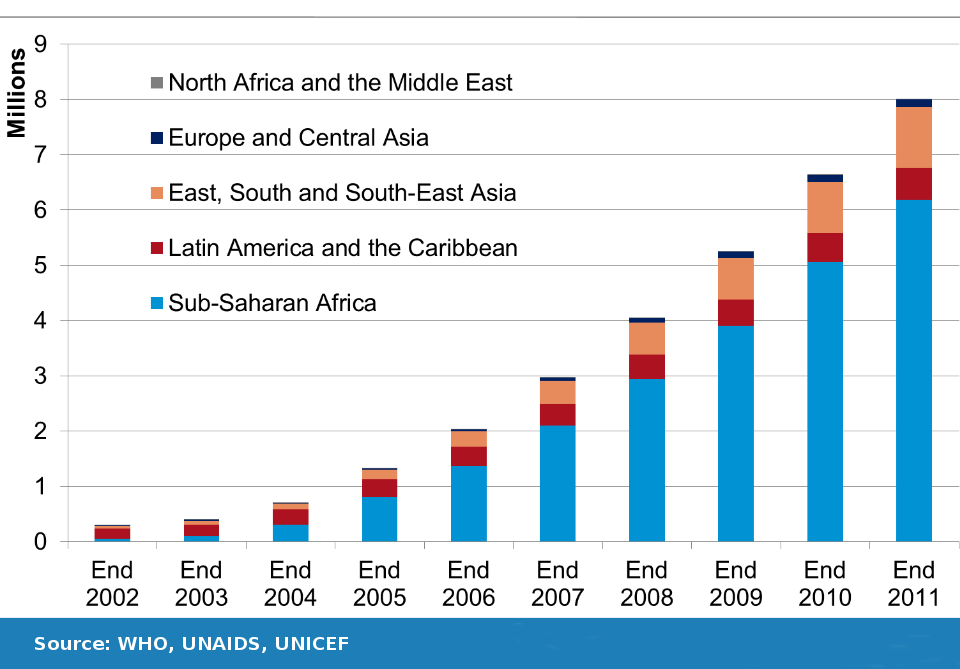 I was recently in India for the Bayer appeal of a compulsory license on Nexavar patents, and have filed two statements in the case, which are available here: /node/1359 and here: /node/1657.

In the Nexavar case, Bayer was charging $5174 per month in India, a country with a per capita income of $121 per month in 2011. The government found this price was not “reasonably affordable” in India. Can you blame them?

The Bayer price was in fact higher in India than than in several European countries. Last year Bayer provided the drug to less than 300 patients in India — a country with a population of more than 1.2 billion people. After the compulsory license was issued, the price of the generic alternatives quickly fell below 3 percent of the Bayer price, and access in India expanded.

My wife is currently taking the Roche version of trastuzumab to treat metastatic breast cancer at a price of $7,861 every 21 days. This is both an expensive and a generally effective drug for HER2+ breast cancer patients. Because of its high price, there is unfortunately almost no access to trastuzumab in developing countries.

If the policy of the United States is to block generic competition for cancer drugs, the predictable and appalling consequence will be to expand the disparities in access to treatments. In practical terms for breast cancer, this means means fewer wives, daughters sisters, and mothers will have access to the best drugs and diagnostics. Think for a moment about how you would react to a trade policy that created barriers for the vast majority of cancer patients in your own country, and then try to understand why exclusionary policies are unpopular in other countries, including India.

Of course, the trade policies advocated by Pfizer concern not only HIV/AIDS and cancer, but any disease or condition that impacts a person’s health. What the Congress is being asked to do is to institutionalize second class access to new medicines for the majority of the global population.

Since 1970, India has become the primary global source of high quality medicines. Many drugs now sold in the U.S. market by both brand name and generic companies are manufactured in India in FDA approved facilities, and India plays a similar role in nearly every country these days. If India adopts the restrictive policies as regards patent and regulatory barriers for generic drugs advocated by Pfizer, the entire world will be impacted.

People who are concerned about the disparities in incomes and access to medical inventions have proposed a way forward for trade negotiations that addresses the legitimate policy objectives of expanding both innovation and access. The fundamental idea is to de-link the costs of R&D from the prices of medicines. In the context of trade policy, this would involve a shift from promoting IPR to promoting R&D. Countries could advance innovation through investments in public sector research, such as the expenditures of the National Institutes of Health on biomedical research, or by offering de-linked incentives, such as medical innovation inducement prizes to reward successful development programs. (See, for example S.626: A bill to de-link research and development incentives from drug prices for new medicines to treat HIV/AIDS and to stimulate greater sharing of scientific knowledge).

In this regard, the Committee should take a look at the positions taken by the Department of Health and Human Services (DHHS) during negotiations at the World Health Organization (WHO). To make a long story short, the WHO is engaged in negotiations over a possible binding agreement to fund medical R&D for certain areas of health priority. The United States is now an outlier in the funding of medical R&D, from both (1) the public sector, and (2) the investments that are induced by strong IPR and high domestic prices. As a percentage of GDP, the United States does more than other countries as regards public sector R&D, and also induces the largest private sector investments of any country.

Under the most likely scenarios for the WHO negotiations, the United States would have no new obligations to fund R&D, but other countries would. The agreement would effectively amplify the U.S. government’s current investments in R&D directed at poverty related illnesses, and require foreign countries, both developing and developed, to do more of what the U.S. government already does through the NIH and other federal agencies. Because the pharmaceutical industry perceives a binding R&D funding agreement as a competing international paradigm for the trade related aspects of R&D, and one that is potentially a substitute for the current paradigm of trade pressures forcing strong IPR and high drug prices, they lobbied the DHHS to kill or block the R&D funding discussions.