Katalin Karikó and Drew Weissman are often described as the pioneers of the mRNA discoveries that underpin the first COVID-19 vaccines. In 2005 both scientists published a paper reporting that a slightly tweaked version of mRNA that can be administered without triggering the immune system, a discovery that is now seen as foundational to the development of mRNA vaccines. Karikó and Weissman secured patents on these discoveries and licensed them non-exclusively to Moderna and BioNTech RNA, the company that has been collaborating with Pfizer for the development of a mRNA vaccine. Several of these patents are subject to the provisions of the Bayh-Dole Act.

In this blog I briefly overview the US government funding and patents filed by Karikó and Weissman.

Government funding to Karikó and Weissman

Drew Weissman appears as the principal investigator on a total of 42 projects funded by the National Institutes of Health (NIH) between 1998 and 2020, representing $18,323,060 in costs. Two of these grants, AI050484 and AI060505, started before the foundational mRNA patent applications were filed and are acknowledged in six of the patents listed in the tables presented below. Katalin Karikó was the principal investigator of four projects funded by the NIH between 2007 and 2011, totaling $1,234,462 in costs. The patents also acknowledge DE14825, a grant to Daniel Malamud, a New York University professor formerly at the University of Pennsylvania. 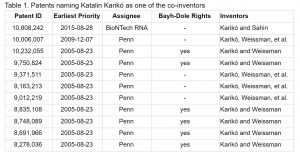 In other words, the United States government funded and has certain rights over at least some of the foundational Karikó and Weissman patents directed to mRNA discoveries.

Some of these patents include broad claims. For instance, Claim 1 of the U.S. patent 8,278,036 (the ‘036 patent) is directed to “[a] method for inducing a mammalian cell to produce a protein of interest comprising: contacting said mammalian cell with in vitro-synthesized modified RNA encoding a protein of interest, wherein said in vitro-synthesized modified RNA comprises the modified nucleoside pseudouridine.” The method described in this claim emcompases any “protein of interest.” This patent was filed in the United States on August 21, 2006, issued on October 2, 2012, and acknowledges being subject to the Bayh-Dole Act provisions.

Other jurisdictions where Karikó and Weissman patents have been filed

Karikó and Weissman have filed twin applications in a number of countries in addition to the United States. Table 2 provides a list of countries where at least one pair of the Karikó and Weissman patents were filed. This analysis, based on the priorities, is limited by data availability, since patent status information tends to be unreliable in some countries. 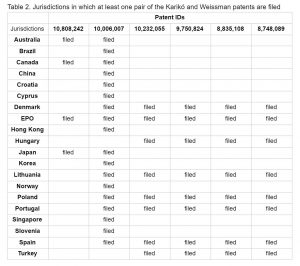 As shown in Table 2, the Karikó and Weissman patents are linked to applications filed in at least 19 countries outside of the United States and the European Patent Office (EPO). This analysis only reflects if a twin application was filed, regardless of whether it was granted. Most of the countries where twin applications were filed are high income. U.S. patent 10,006,007 has a pair in at least 18 additional jurisdictions.

Sublicenses to Moderna and BioNTech RNA

Moderna and BioNTech, the companies behind the two leading COVID-19 vaccine candidates, have both obtained non-exclusive sublicenses over mRNA patents assigned to the University of Pennsylvania. The licenses have been disclosed to the SEC, but with heavy redactions that keep in secret the numbers of the covered patents.

The University of Pennsylvania exclusively licensed certain mRNA patents and applications to CellScript and its affiliate, mRNA RiboTherapeutics, on December 20, 2016. CellScript further entered into non-exclusive worldwide sublicenses with Moderna on June 26, 2017 and with BioNTech on July 14, 2017. Although the patent and application numbers are redacted, the Moderna sublicense agreement does explain that they relate to “technology which was developed by Drs. Drew Weissman and Katalin Kariko of Penn’s Perelman School of Medicine.” As such, it is likely that these licenses include at least some of the patents listed in Table 1. In particular, it seems likely that these licenses cover the ‘036 patent, which has broad claims directed to mRNA methods.